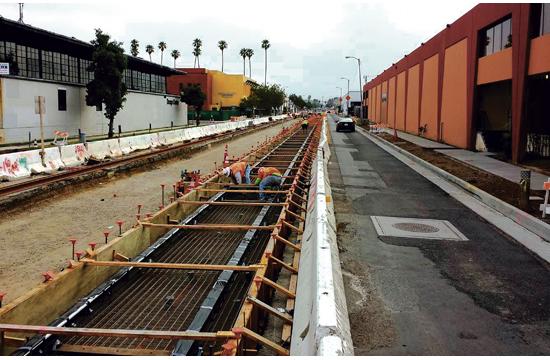 In a simple move of cooperation between city government and county agency, the Santa Monica City Council unanimously approved on Tuesday a Memorandum of Understanding (MOU) with the Los Angeles County Metropolitan Authority (Metro) to operate the Expo Line from Olympic and Centinela to just shy of the Santa Monica Pier.

The MOU would allow for Metro to maintain its train schedules in and out of Santa Monica while allowing City Hall to ensure vehicular traffic coexists with the trains.

“This Memorandum of Understanding will stipulate how the trains operate in the City, what will be constructed as part of the light rail operation to ensure that the trains interact with the traffic signals appropriately, and then what the City will do in terms of operating traffic signals,” traffic engineer Sam Morrissey told council members. “We’re putting in more infrastructure than any other city has … in advance of the light rail.”

According to City staff, the Expo Line would be street-level on Colorado as it approaches the terminus station at Fourth Street and would be required to observe the same speed limit rules as automobiles.

City staff added Metro and Santa Monica operate at headway intervals “of no greater than every five minutes in each direction.”

Council member Tony Vazquez expressed concern of how the Expo Line, which travels in an east-west orientation, would navigate across Lincoln Boulevard, especially when a fire truck is en route to an emergency.

“We should still allow for the normal north-south traffic along Lincoln Boulevard,” Morrissey said.

As for emergency vehicles, Morrissey stated a general plan has been developed for coordinating emergency vehicles with Expo Line operation in the western half of Santa Monica. He added greater perspective would be gained when the City and Metro begin testing the Expo Line.

Still, according to the MOU, City Hall is responsible for developing and operating an “emergency vehicle protocol” at the Colorado-Lincoln and Colorado-14th crossings.

According to the MOU, the general plan for emergency vehicles is as follows:

The Expo Line will be a “street runner” along Colorado between Fourth and Seventeen streets and elevated as it travels through the eastern half of Santa Monica and into West Los Angeles.

Mayor Pam O’Connor was not present for the entire May 27 council meeting; Mayor Pro Tem Terry O’Day conducted the meeting in her stead.

Council member Bob Holbrook was not present for the vote on the MOU.