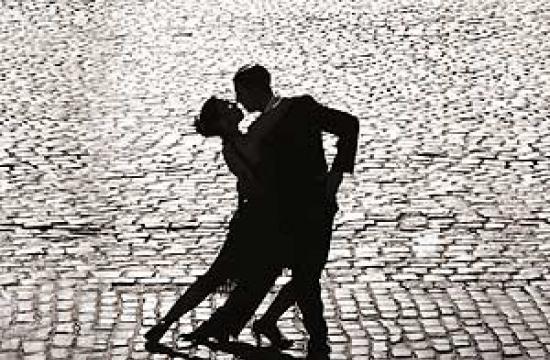 The Santa Monica Symphony Orchestra, under the baton of Maestro Guido Lamell, celebrates Memorial Day weekend with “Tango Fantastique” the final concert of its 2013-2014 season. The concert takes place tomorrow night, Saturday, May 24, at 7:30 p.m. in Barnum Hall, on the campus of Santa Monica High School.

The evening opens with the Nuevo Tango of Astor Piazzola.

“Piazzolla’s tangos have their own character,” says Maestro Lamell. “Piazzolla elevates the medium with a classical approach to the traditional style which is very compelling.”

In an effort to reach out to the community and introduce classical music in an accessible way, the symphony offered a free series of tango lessons at Virginia Avenue Park in Santa Monica in the month of May.

“Tango in the Park” featured live music courtesy of Santa Monica Symphony musicians and attracted dancers of all ages and experience levels. Dance teacher Daniel Ponickly, Artistic Director of Ballroom Madness “did a wonderful job of introducing the tango to people who had never danced before” said Lamell. “He had them dancing in minutes! Tango in the Park was fun and inclusive and we were delighted at the response from the community.”

At Saturday night’s performance of Piazzolla’s Libertango, the Symphony will be joined by tango dancers from the Santa Monica-Malibu Unified School District’s Ballroom Madness program and their teacher, Daniel Ponickly.

“At first, students are terrified of ballroom dance” said Ponickly, “but then they accept it and come to love it.”

The fifth grade students performing on Saturday night have chosen to continue dancing and “are excited to be dancing with the orchestra at Barnum Hall.”

Next on the evening’s program is the finale to the Symphony No. 3 of Camille Saint-Saens, also known as the Organ Symphony. Regarded as the single greatest work for organ and orchestra, it showcases the wonderful Barnum Hall organ and organist Roger Daggy. Mr. Daggy has played throughout the United States and Europe and is currently the organist at the Parish of St. Matthew in Pacific Palisades.

Closing out the program is the magnificent Symphonie Fantastique of Hector Berlioz.

“It’s so far ahead of its time,” said Lamell. “Even though it was written in 1830, it employs recently explored compositional techniques.”

The epic piece is an audience favorite and “a feast for every member of the orchestra. It allows every musician to play, no holds barred.”

As with all Santa Monica Symphony concerts, admission to the concert is free.

Parking is available at the Santa Monica Civic Auditorium lot or in the colorful Civic Center Parking Structure at 4th Street and Olympic Boulevard.

If you would like to talk to Santa Monica Symphony musicians and enjoy performances of both classical and popular music, stop by the Santa Monica Festival, Saturday, June 14, 11 a.m. to 6 p.m. in Clover Park.

On October 18, 2014, the Santa Monica Symphony inaugurates its 70th season with a concert in Barnum Hall featuring cellist Robert deMaine.