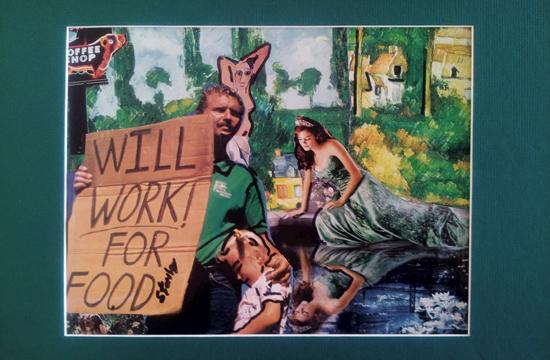 Following the first installment of its food themed show “Food for Thought,” Blue 7 Gallery in Santa Monica will host a gala opening reception this Saturday, June 7 from 6-8 pm, for part two: “The Second Course.”

“Second Course” features 10 artists highlighting food as the central theme. Entertainment will be provided by a local live band.

The show ends with a closing reception on July 26 from 6-8 pm.

“Food is something that anyone can relate to, and with our mix of artists we can come from different angles and perspectives to show food in a different light,” said photographer Lucius Peterson, whose work is featured. “It’s more than merely taking a representation of food, it’s injecting an angle, a take on it, that perhaps gets the viewer to see things in a new way.”

The first installment of “Food for Thought” was the brainchild of the collective that populates Blue 7 Gallery.

“Once we came to a consensus, it was on to producing the darn thing, which turned out to be such fun, we decided that, much like a meal, this should have a second course. Who knows where dessert will lead us?” said Blue 7 Gallery owner Randy Ball.

Together, the enterprises form a symbiotic service to artists by providing gallery space for rental exhibitions, and to the community by providing art and custom framing services that someone riding the #7 bus of the Santa Monica Big Blue Bus line can afford.

A 10 percent discount applies during the receptions on all purchases.

The gallery is 3129 Pico Boulevard, Santa Monica. Its hours are Monday through Saturday from 10 am to 6 pm.

By mirrormmg June 6, 2014
in Life and Arts
Related Posts