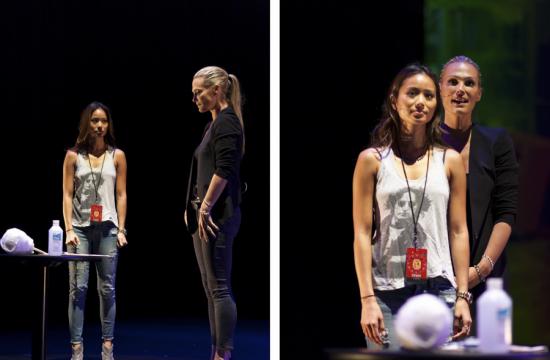 The plays are the culmination of six directors, six writers, and 24 actors working to produce the six short plays, in just 24 hours.

Brainstorming begins at 10 pm on Thursday. After the community of artists share a costume, a prop, his or her special skill set, each writer has to compose a 10-minute play by 7 am Friday. By 9 am directors will have selected their pieces and their cast will rehearse over the course of Friday.

Friday night’s performances at 8 pm will be performed before a live audience, interspersed with musical acts. Immediately following is an after party where the cast can relax and let loose after an intense 24 hours.

The proceeds of the event will benefit the Urban Arts Partnership, one of the leading arts education organizations in the country.

Actor Tracie Thoms’ said her first “24 Hour” play was in 2004, adding the experience was “both terrifying and exhilarating.”

She said preparing a play in such a short time-frame was nerve racking, but she shared that it made her feel better to know that “the audience actually loves it when you mess up.”

As someone who cares deeply about the arts, the cause is something that resonates with her.

“Learning how to read music [in school] opened my mind up to a lot of things, including problem solving,” she told The Mirror. “Even without a cause it would be fun, but knowing that we are involved in making a difference makes everything much more enjoyable.”

The 24 Hour Plays is a long-running institution in New York and international theater, but its work is always fresh and new.

This is the fourth year that The 24 Hour Plays has performed in Los Angeles. This event is produced by Kevin Chinoy and Francesca Silvestri of the Freestyle Picture Company and the 24 Hour Company.

Tickets can be purchased at www.urbanarts.tix.com.

By mirrormmg June 18, 2014
in Life and Arts
Related Posts