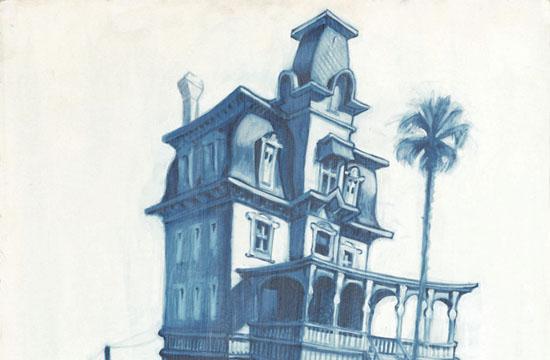 In the past when students said goodbye to college, they embarked on a career and never looked back. These days, switching careers and adding new ones have become commonplace.

The economy had a dramatic impact on many… forcing this generation to consistently re-invent themselves.

Working hard and doing a variety of jobs has also opened up new possibilities.

Creative types who choose to nurture a life’s passion in not just one arena, yet many, now have a chance to flourish in L.A.’s progressive open-minded atmosphere.

Gallery owner and fashion designer Jeanie Madsen has been presenting art exhibitions for the past five years at her gallery (Jeanie Madsen Gallery), which also doubles as a high-end fashion boutique on Ocean Avenue in Santa Monica.

In the past two years, she has teamed up with DJ, gallerist, and artist L. Croskey.

Croskey is one of the co-owners of Thinkspace Gallery as well as the founder of Cannibal Flower Art Show, a pop-up art and performance event that is celebrating its fourteenth anniversary in September.

Presenting four to five shows a year, Croskey (who often DJs the events) curates the events with co-producers Valentine Reitblat and Michele Waterman.

Together, Madsen and Croskey have merged their talents and co-curated several exhibitions.

The newest exhibit is titled “I heART LA” and features 33 artists.

John S. Reynolds is one of the exhibiting artists as well as an accomplished musician.

Throughout his life, he has been both painting and playing music.

Opening for Cab Calloway, Julie Andrews, Andy Williams, the Smothers Brothers, and more, Reynolds has performed all over the world with several jazz and swing bands.

As with most artists, Reynolds has had to find a way to support his family… music has played an active role in bringing home the bacon.

His current “day job” is playing guitar with the Ellis Island Boys in Paradise Gardens at California Adventure/Disneyland.

Having a supportive wife and family who encouraged him to pursue both his passions, he somehow managed to do it all.

“I can remember standing in the kitchen holding my son who was still in diapers and my three-year-old daughter was having a tea party at my feet and I was painting away. I was a stay at home dad for a while and that gave me a lot of opportunity to paint,” he said. “But even with a day job, I still seem to find the time. It is important to me. It is my passion.”

Reynolds’ work has been featured in exhibitions throughout Los Angeles (www.johnsreynolds.com).

The art of Chase (also a designer) will be part of the exhibit as well (theartofchase.com).

“Chase is a street artist with positive messages,” Madsen said. “He provokes thought and positive thinking.”

She admitted she didn’t care about anyone’s resume, only the art.

“When they love their work, that’s what sells,” Madsen insists. “Passion sells!”

The artist reception for “I heART LA” will be held today, June 20 from 7-10 pm at the Jeanie Madsen Gallery, located at 1431 Ocean Avenue, Santa Monica.

RSVP via email to Jeanie@jeaniemadsengallery.com.

The exhibit runs through July 9.

By mirrormmg June 20, 2014
in Life and Arts
Related Posts