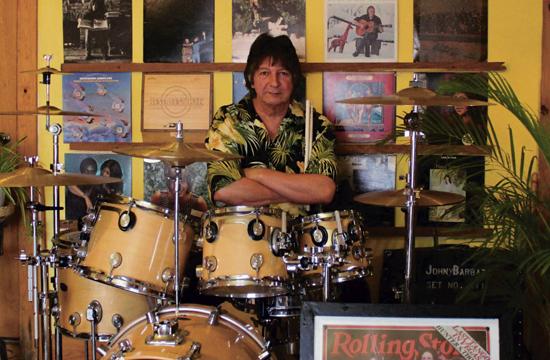 Legendary drummer Johny Barbata, one of the greatest rock & roll drummers of all time, will host a book signing at the Music Center in Santa Monica on Wednesday, June 11 from 12-5:30 pm.

Now, he shares the days and nights of his life as a star musician on the road with hit groups such as the Turtles; Crosby, Stills, Nash & Young; Steven Stills, and Neil Young, as well as Jefferson Airplane; and Jefferson Starship.

Already a established session drummer when he joined the Turtles, he was one of the pioneering drummers who converted pop music rhythms from the down-beat rhythms of the 1950’s to the off-beat rhythms that have dominated ever since.

Johny lived the high-life most people only dreamed about and he met challenges rarely experienced.

In this first person narrative, he relates the stories that shaped his life, with behind-the-scenes and after-the-show details.

The life and times of this superstar drummer and his encounters around the world are chronicled from his earliest days when he discovered music to the tour stops in Hollywood, Las Vegas, San Francisco, New York, London, and beyond.

The book titled “Johny Barbata The Legendary Life of a Rock Star Drummer” is one any fan would want to read.

Barbata’s drum rolls and background vocals helped to define the beat and sound on songs by some of the top rock bands in the 60s, 70s, 80s, and 90s, his stylized drum riffs are heard on more than 20-hit singles and more than 100 albums.

From a career that spanned the greatest years of rock-and-roll and shaped some of the hottest styles and music of the century, take an intimate and exciting look at the beloved groups and times.

By mirrormmg June 5, 2014
in Life and Arts
Related Posts