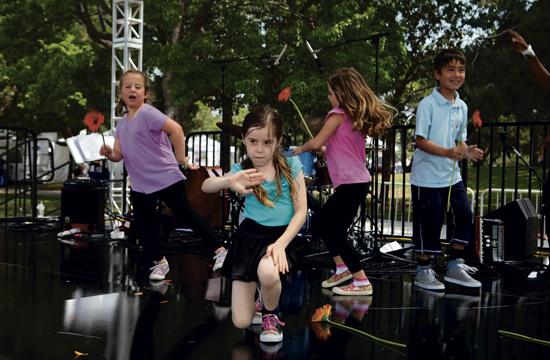 Two stages with music and dance performances, food trucks and carts, a culinary stage, and craft vendors – that’s some of the highlights at this year’s annual Santa Monica Festival this Saturday at Clover Park.

Now in its 23rd year, the free celebration from 11 am to 6 pm will also include free Zumba classes, yoga, and karate, and hands-on workshops such as succulent potting.

The event focuses on elements that define the people of Santa Monica, whether it be art, culture, food, sustainability, wellbeing, or transportation.

The festival is the City’s second largest community event (the biggest is Glow).

According to Allison Ostrovsky, Cultural Affairs Supervisor for the City of Santa Monica, “It’s a celebration of all that is Santa Monica and is an opportunity for people to revel in this fair City and to celebrate, connect, and create with others.”

“In addition to presenting a different line-up of music and dance annually, we are always adding and changing elements to keep it interesting for attendees and to ensure there is something new to discover or explore from year to year,” Ostrovsky said.

Ostrovsky said the festival promised to keep all attendees interested and engaged throughout the whole day.

“A few new additions this year include a Juneteenth Stage presenting blues, Motown and gospel music, as well as Samba and African dance, the Family Bike Hub, which will be an explosion of hands on bike related activities and workshops, and a unique community photo project that brings to light the relationship between you and the city you live, work or play in,” she said.

Sustainability will play a big role in the festival.

One example is the Culinary Stage where chefs will create a vegetarian meal, which is better for the environment than one including meat. Another example will be the Family Bike Hub, which is being coordinated by SM Spoke and will include a bike exhibition, first ever bike rodeo, and more.

Ostrovsky said the festival would also walk its talk by reducing the trash going to the landfill and maximizing what is recycled and composted.

Santa Monica Mayor Pam O’Connor will make a special appearance to give the city welcome and as to make a proclamation for Juneteenth.

However, the festival is not only for locals. Tourists and anyone interested in the Los Angeles area is welcome.

Big Blue Bus will offer free rides on Route 8 buses only on Saturday to festival participants – a coupon must be printed in advance on www.BigBlueBus.com.

Attendees must show the bus operator the coupon when boarding Route 8 to and from the festival. Children aged four and under ride for free on any Big Blue Bus.

For more information and a complete schedule of the festival’s offerings, visit www.smgov.net/festival.

By mirrormmg June 13, 2014
in Life and Arts
Related Posts