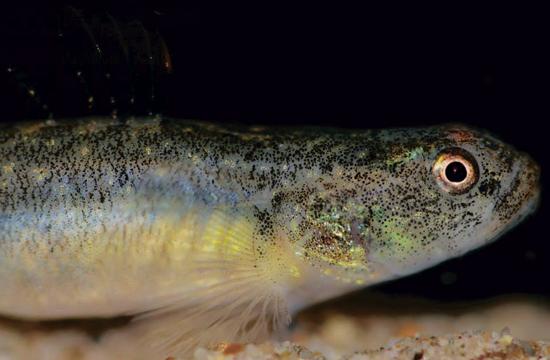 The tidewater goby, an endangered species only found in California’s streams and estuaries, will have its debut at Heal the Bay’s Santa Monica Pier Aquarium today, June 6.

The Aquarium is one of just two public aquaria to receive permission to exhibit the tidewater goby, a tiny fish only found in the streams and estuaries of California.

The tidewater goby, Eucyclogobius newberryi, is listed as an endangered species and serves as a poster child for threatened waterways.

Partnering with the Cabrillo Marine Aquarium in San Pedro, Heal the Bay’s marine science center recently obtained the gobies from the California Department of Fish and Wildlife’s toxicology department in Carmel.

Today, the fish becomes the centerpiece of the recently installed watershed exhibit in the Aquarium’s Dorothy Green Room. Gobies are threatened with extinction because of loss of habitat – a product of coastal development and diversions and modifications to the streams and estuaries that the fish lives and breeds in.

This diminutive fish, rarely longer than two inches in length, is silver and brown with a sleek shape.

The goby’s fins are distinctively long and flowing for the size of its body, and its tiny eyes protrude prominently – all features that give the goby more presence than expected for such a small fish.

The Aquarium’s Watershed Exhibit demonstrates the perils of urban development on waterways and on the animals that inhabit them – particularly the tidewater goby. Debuting today, an exhibit of gobies will be featured in the natural watershed component of the exhibit, alongside displays featuring other riparian and estuarine organisms.

Redesign funds for the Dorothy Green Room and the watershed exhibit were provided by an Annenberg Foundation grant and funds from Proposition 84, a state storm water grant program.

Visit the tidewater gobies – and the more than 100 other species of local marine life at the Aquarium – Tuesday through Friday from 2 pm to 5 pm and weekends from 12:30 pm to 5 pm.

In July and August, enjoy an extra hour of exploration when the Aquarium remains open until 6 p.m. Kids 12 and under are admitted free; for all others, admission is $5 per person or $3 per person for groups of 10 or more, regardless of age. Call 310-393-6149 for more information.

Since Heal the Bay acquired the Aquarium in 2003 from UCLA, more than half a million visitors have been welcomed during public hours and nearly 140,000 students have been educated during in-house education programs.

By mirrormmg June 6, 2014
in Life and Arts
Related Posts