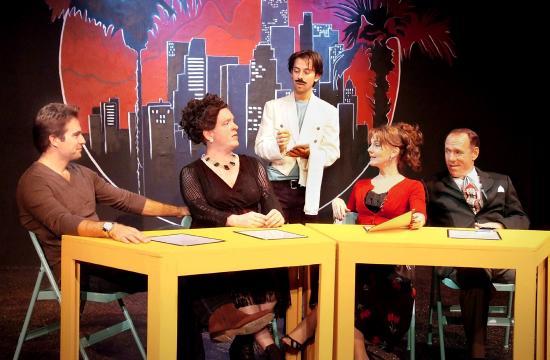 Santa Monica resident and Emmy-Award winning playwright-producer, Peter Lefcourt, is the epitome of the local who doesn’t want to leave home even to go to work.

Currently the hilarious play he wrote and executive produced, “The Way You Look Tonight” is running at the nearby Odyssey Theatre.

This means mostly working out of his “modest but not entirely unassuming house” in Santa Monica Canyon with his collaborator and wife, director Terri Hanauer.

Peter describes the living quarters as within walking distance to the Pacific Ocean, where he “goes to commune with those gods who, he feels, might be kind enough to protect him.” There is even a secret neighborhood fire trail for walking to the beach, to avoid traffic.

When Hanauer and former New Yorker, Lefcourt, were first married, they kept separate residences in Santa Monica Canyon and in the Hollywood Hills, respectively, to raise their families.Guess which one won out.

“The Way You Look Tonight” is their gender-bending comedy of manners about the lives of two Los Angeles couples maintaining a civilized relationship “for the sake of their son.”

The restaurant dinner that introduces the new spouses to each other is in honor of their son’s upcoming graduation – with an online degree, in micro-brewery, from Pacific University. Mom, Esme, is “into serial causes.” You get the picture.

The intimate theatre is the perfect and clever venue for Lefcourt’s to show, not explain, “the perversions of the human heart,” including the couples driving to and from to the restaurant. There are so many funny throwaway lines the cast had to wait for the audience to stop laughing once or twice. About the most awful thing that happens is expressed by the line, “What! You have to drive east on Wilshire during rush hour traffic!”

Working at home, even in Santa Monica, on the couple’s fourth collaboration together is both positive and negative, says Lefcourt, “because it means having 24/7 access to each other. It’s nice to have the time to work together, but we tend to get obsessive about the project. “Their past hit plays include “Mutually Assured Destruction” and “The Assassination of Leon Trotsky: A Comedy!”

Lefcourt and Hanauer aren’t the only ones in the play with a Santa Monica connection. Robin Riker (Esme), the delightful, effervescent lead, met her husband while shooting a film in Santa Monica. He lived in Santa Monica and they dated there and fell in love there – plus, she got her divorce from her first husband at the courthouse in Santa Monica!

And we can’t leave out Esme’s ex in the play, the engaging Robb Derringer (Teddy) who just about steals the show, and shows off his former dance troupe talents.

The production is an also easy drive away (and free parking!) to see favorite TV performers up close, John Arzilli and Sean Smith, and to watch new talent, such as Blake Silver – who lives in “Santa Monica-adjacent but spends plenty of time there.”

“The Way You Look Tonight” continues through Aug. 24. Performances take place Fridays and Saturdays at 8 pm, and Sundays at 3 pm. Tickets are $25 on Fridays and Sundays and $30 on Saturdays. The Odyssey Theatre is located at 2055 S. Sepulveda Blvd., West Los Angeles, 90025.

By mirrormmg July 28, 2014
in Life and Arts
Related Posts