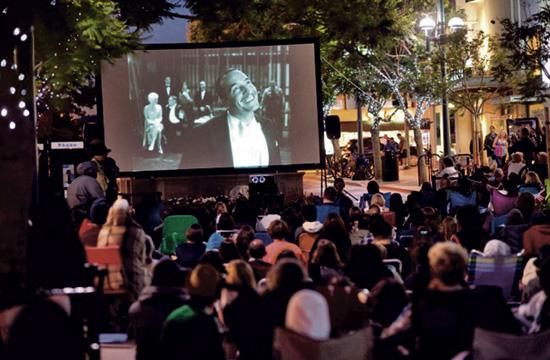 Santa Monica’s popular outdoor screening series Cinema on the Street returns to the corner of Third Street and Wilshire on the Third Street Promenade this Friday.

A full slate of films across the genre spectrum is scheduled.

In celebration of Third Street Promenade’s 25th Anniversary, what was once a four-night film affair is now a six-night series beginning at 7:30 pm on Friday, July 11. The films will be screened at 8:30 pm on each of the evenings.

The series will continue each Friday through Aug. 15.

Attendance is free and open to the public, and moviegoers are encouraged to show up early to stake a sweet spot.

Produced by Downtown Santa Monica, Inc., this summer’s movies were selected online by popular vote for the first time since Cinema on the Street’s debut in 2011.

A film genre was assigned to each screening, with two nights devoted to 1989 classics that share the same birth year as Third Street Promenade. Leading off the series is the midsummer staple Field of Dreams, and its iconic mantra ‘If you build it, they will come’… a fitting parallel to the chance taken on Third Street Promenade’s own conception 25 years ago.

As 2014 marks Third Street Promenade’s 25th Anniversary, Downtown Santa Monica, Inc. has prepared a summer’s worth of events to celebrate the monumental occasion for the beloved public street. Along with the Cinema on the Street series, the calendar includes Picnic on the Promenade, a Promenade Symposium on its evolution, and a grand two-day party in September.

For more information about Third Street Promenade and the 25th Anniversary celebrations, visit the blog at SantaMonicaCentric.com. Information can also be found at DowntownSM.com.

By mirrormmg July 10, 2014
in Life and Arts
Related Posts