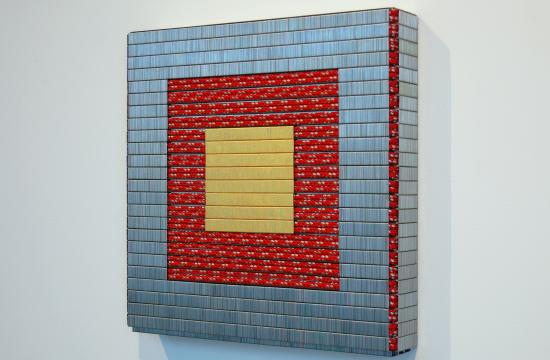 When you think of art, paintings are usually the first medium that comes to mind. However, in today’s market, “art” covers a broad spectrum. Mixed media has fast become one of the leading forms of art.

I recently found myself out on an art trek in the Culver City Arts District when I stumbled into Sixty29 Contemporary, also the art studio of Carlo Marcucci.

The front gallery featured colorful and benign abstract paintings by Sallie Whistler Marcucci. I continued into a back room where the art of Carlo Marcucci caught my eye. Perhaps inspired by French artist Baptiste Debombourg’s use of staples, Marcucci puts his own spin on creating art with these tiny shards of metal.

From afar, the linear work was bold yet articulate with a dash of cubism. However, as I approached the work for a closer look, I noticed the staples, which for me brought an entirely new meaning to the work.

The artist was more than affable, answering all my questions while also taking the time to explain his process. Marcucci has been creating art for more than 30 years. Working in several mediums, he paints (acrylic) on canvas or panel, yet also works with non-traditional materials such as the previously mentioned staples but also noodles (spaghetti, udon and soba) – all part of his Wheatfields series.

“Generally I can create one in about a week for the small ones,” reveals Marcucci, “but it takes about a month to do the medium sized ones.”

The Staples (Bound Compositions) series was inspired by his Wheatfields series.

“They are very similar even though they involve different materials,” he said. “Both require a bottom-upward building of fragile linear materials (staples are delicate like pasta).” Marcucci often goes back and forth between series working on two or three bodies of work at the same time.

“This allows me to experiment with certain techniques that can be transferred to the other body of work,” he said.

Marcucci’s work can be viewed by appointment. Sixty29 Contemporary, is located at 6029 Washington Boulevard, Culver City. For more information, call 310.500.0008 or visit sixty29contemporary.com, carlomarcucci.com, and salliewhistlermarcucci.com.

At Hinge Parallel, another stand out exhibition attracted my attention. Stepping into the gallery, I was taken aback by the impressive botanical wall sculptures that engulfed the gallery.

Created by Joshua Abarbanal, each wood installation is a masterpiece of high tech carpentry.

Using lasers for cutting the thinner pieces, the artist uses a variety of veneers and natural stains to create the colors. The installation is then adhered to the wall, allowing the sculpture to adjust to its new surroundings.

The sculptures are akin to the inner workings of a clock, each form interacting with the other, thus becoming more than the sum of its parts.

“This is my first time working with Joshua and his first solo show,” explained gallery director Casper Martin. “The response to Joshua’s work has been some of the strongest of all our shows thus far.”

By mirrormmg July 13, 2014
in Life and Arts
Related Posts