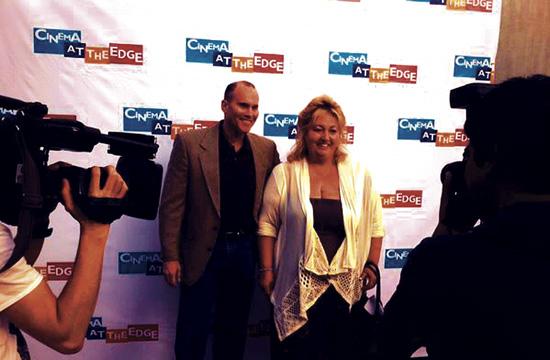 Three days of screenings, parties, and artist programs that celebrate independent filmmaking will all be part of the 2nd Annual Cinema at the Edge festival in Santa Monica this weekend.

It will be held this Friday through Sunday, July 11-13, at the two theaters at the Edgemar Center for the Arts. Films will compete in the categories of narrative feature, documentary, and short film for Jury and Audience awards.

The winners will have the opportunity to screen their film for industry professionals working in international film production and distribution.

The film festival includes about 50 narrative and documentary feature films, and short films to a diverse local and international audience.

From its opening night VIP gala to celebrity-studded premieres, the Cinema at the Edge highlights film from every corner of the globe.

Festival founder Michelle Danner, who is Artistic Director at the Edgemar Center for the Arts, said organizers were delighted to give independent filmmakers an opportunity to screen their films in a community setting on the Westside.

“Surrounded by beautiful beaches, bustling restaurants, bars, retail shops and constant foot traffic, what the Westside has to offer filmmakers and cinephiles, will be quite different from what you’ll find in Hollywood,” Danner said. “Winners of the jury and audience awards in each category will be considered for acquisition by industry professionals working in international film distribution.”

Danner said she was thrilled to showcase independent films in a festival and community with such a great appreciation for art and cinema.

“Many films that screen at the larger film festivals don’t immediately catch fire and tend to fall through the cracks,” she said. “We want to give these exceptional films another chance to connect with audiences and to gain exposure and additional opportunities for global distribution.”

The Edgemar Center for the Arts is a 501(c)(3) arts organization with a three-pronged mission: to provide an environment that nurtures the creative process and encourages collaboration between writers, directors, actors, musicians, dancers and visual artists; to create a learning environment for children and adults; and to invite the community to observe, engage, and interact, to add its voice to our creative discovery.

The Edgemar Center for the Arts is located at 2437 Main Street, Santa Monica.

For more information on the festival and to purchase tickets, visit cinemaattheedge.com.

By mirrormmg July 9, 2014
in Life and Arts
Related Posts

Downtown Santa Monica hosted a Taco Crawl through the area with Danny Trejo and seven other participating restaurants..Video sponsored by...