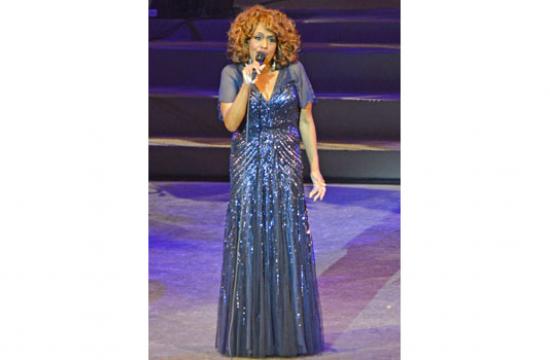 Being a transplanted born and bred New Yorker raised in the shadow of Broadway, I was quite excited and looking forward to “Broadway Under The Stars,” Chris Isaacson’s musical review with Jennifer Holliday headlining this first-class production which was presented at the jammed iconic John Anson Ford Amphitheatre.

With a backdrop of the trees encircling the stage, almost leaning against the darkening sky, coupled with a perfect Los Angeles balmy night, the natural setting was ideal for the evening’s exciting bill of fare.

Under the crack, professional staging of David Galligan, and the pitch perfect musical direction of Gerald Sternbach, who was on piano and conducted his assembled a band and three back-up singers, the performances more than met my expectations.

Obba Babatundé acted both as performer and host, introducing the line-up of Broadway singers by reading from a paper scroll.  In between the other singers, he entertained the audience with his wonderful singing, dancing and charming patter, with the opening number “Magic To Do” from “Pippin,” setting the stage for the mostly Broadway show tunes that entertained the enthusiastic audience throughout the almost three-hour long evening.

Following a rousing number that included the five incredible singers that would entertain us throughout the evening, Erich Bergen, who played Bob Gaudio in Clint Eastwood’s “Jersey Boys,” was the first of the performers to do a set.

Wearing a black tuxedo jacket with sequins on the lapels, he would sprinkle in a line from “West Side Story,” “Something’s Coming” as he talked about the arc of his career.  He said was actually at the Gershwin Theatre when “Wicked” was running, but at that time he was selling tee shirts at the merchandise counter.

Some of his other selections included “Easy to Love” from “Anything Goes,”  “As Long as You’re Mine,” from “Wicked,” and brought the house down when he sang Frankie Valli’s “Can’t Take My Eyes Off You,” inviting the audience to sing along with him.

An interesting choice, and an audience sing-along as well, was Irving Berlin’s evergreen “White Christmas,” from the 1954 film starring Bing Crosby, Danny Kaye, and Rosemary Clooney.  So for a few brief moments, it was Christmas in August.

Next up was Rogelio Douglas Jr., an imposing gentleman with a smoky, bluesy voice, which served him well in his rendition of Duke Ellington’s “I Ain’t Got Nothin’ But the Blues,” an equally great rendition of “In the Heights,” from the musical of the same name and, “Proud of Your Boy,” from “Aladdin,” quipping before singing, “And now for the whitest part of the evening.”

This talented performer did a great impression of Sammy Davis, Jr. and sang several a lovely duets throughout the evening with special guest Janet Dacal including, “On Top of the World,” by the American alternative rock band Imagine Dragons.

Later in the evening, he did fun rendition of “Under the Sea” from “The Little Mermaid,” with the dance ensemble, choreographed by Lee Martino, almost floating on stage wearing bathing suits, flippers, and snorkels, tossing beach balls into the audience. The routine was a bit hokey, but fun.

Next up was Danny Gurwin, who has one of those legit voices that goes seamlessly from the very low notes (chest) to the soaring high notes (head.)  Before launching into singing, he told an amusing story about his repertoire in that he chose selections from shows he did not get. His powerful voice served him well in a very emotional rendition of “Empty Chairs At Empty Tables,” from “Les Miserables.”

Suddenly a voice emanated from the audience and a blond lady stood up and walked towards the stage to introduce Babatundé, who was next up to do his own set.

It turned out that the lady in question was none other than Sally Struthers who did a fine job of setting the stage for the host/performer who gave a stirring interpretation of “What Kind of Fool Am I,” and later in the evening a rather long version of “Mr. Bojangles,” written and recorded in 1968 by country music artist Jerry Jeff Walker and became one of Sammy Davis Jr.’s signature songs.

Perhaps one of the purest blues voices of the evening belonged to the adorable, and most successful Chad Kimball whose unpretentious, simple presentation was almost disarming.

He sang a few blues songs including “The Music of My Soul,” from the musical “Memphis,” in which he starred. It 2010, the show won a Tony Award for Best Musical and after hearing Kimball sing, your only regret could be that you didn’t get to see that show.

Kimball also sang a charming baseball song and amused the audience by confessing that he played a cow in the Broadway production of “Into the Woods,” the music and lyrics by the incomparable Stephen Sondheim.

With the clock ticking slightly past 10:30, it was really time to bring on Jennifer Holliday who was billed as the headliner and the reason, I should think, the vast majority of the audience bought tickets.

With great fanfare and build up, the host for the evening finally introduced her and escorted her down the steps. First, let me say that she looked amazing in a black, glittering gown.  She spoke for a while and then launched into “I Am Love,” by Michael W. Smith and originally sung by “The Jackson 5.”

Miss Holliday shared that she went directly from a Baptist choir to  “Dreamgirls,” thirty-three years ago, and didn’t even know who Barbra Streisand was or the other popular singers at that particular time.

She said ultimately she learned a lot from listening to Ms. Streisand’s recordings as well as Frank Sinatra and other artists she was instructed to listen to so she could broaden her repertoire. And, broaden it she did as she presented an amazing “At Last,” made famous by Etta James, Frank Sinatra’s “The Song Is You,” and “What I Did For Love,” from “A Chorus Line.” She didn’t just sing the lyrics – she chewed each word with her lips, tongue, and face and then hurled them out into the cool night air for the audience to savor.

In between singing, this glorious diva, without “the attitude,” told amusing stories tracing the hills and valleys of her bumpy career following her success in “Dreamgirls.”

Her showstoppers were two songs from “Dreamgirls” – “One Night Only” and a gut-wrenching, spellbinding stylization of “And I Am Telling You I’m Not Going,” which was really goose bump time.

At the conclusion of the song, the audience sprung to its feet and was showered with silver streamers, marking the finale of this perfect musical experience delivered by an ensemble of truly gifted performers. The only sad note is that it was a one-night only performance.

By mirrormmg August 28, 2014
in Life and Arts
Related Posts