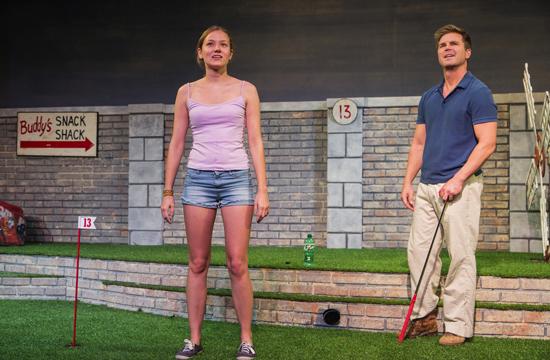 Neil LaBute is a playwright who doesn’t shy away from theatrical blood letting. His play “In A Dark Dark House,” which is a guest production on stage at The Matrix, is yet another of LaBute’s fascinating, albeit painful, journeys into childhood trauma, memories of which are trapped in the subconscious or too painful to consciously revisit.

LaBute admits that having grown up in an abusive home, “It was time for me to take a stab at a few personal demons.”  And, take more than a stab he does in this riveting, spellbinding, surgical exploration of demons demanding to be released.

At rise, Drew, wonderfully played by Shaun Sipos, is sitting in a wheel chair dressed in hospital garb. With birds chirping in the background, the bucolic “First Step Garden” setting, perfectly designed by John Iacovelli, is no doubt a riff on a 12-Step program. This tranquil, idyllic setting is in sharp contrast to the emotional explosions that permeate LaBute’s 90-minute moving play.

Following a drunk driving accident, the affluent Drew, a disbarred attorney, was initially sent to a psychiatric unit on a 72-hour hold, but subsequently his stay was extended so he could participate in group therapy to facilitate his recovery.

Drew needs his older but estranged brother Terry’s help in testifying about their abusive childhood where it appears that they were both sexually abused by a family “friend” by the name of Todd Astin, who used to call Terry “Buddy Boy.” Drew’s position is that this is the primary cause for his drinking and drug addiction.

It is obvious when Terry arrives that he is tightly wound and projects a potential emotional explosion. He is not happy about driving four hours to visit and harbors resentment toward Drew because of his lack of communication and wants no part of having to meet the group or testifying on his behalf.

In typical LaBute dialogue, ends of sentences disappear illuminating that there is much more that these characters want to say but at this particular moment, are reluctant to complete their thought. There is friendly and not-so-friendly banter with Terry resisting any physical contact with Drew who wants to hug him. Drew sprinkles words like “dude,” “bro,” and “whatever” in his conversation which drives Terry crazy who says that his 35-year-old brother, who is married and has a couple of kids, is too old to be using those expressions and demands that he stop doing so.

With a lot of nasty ping-pong banter, Terry comments, “Not so great being sober,” to which Drew answers, “Not when you’re around.”

Drew mentions their dad and Terry comments, “Dad? Dead I hope.” No doubt the memory of all those beatings with a strap is behind his comment. He also reminds Drew that he ran interference for him to save him from their father’s wrath. In a confessional mode, Terry, a security guard, says that “I couldn’t become a cop because of my record,” adding, “I spent most of my life hiding,” and being a decorated serviceman, he is not sure what he’s capable of doing. The unbridled rage could take over at any time and we see him, who appears to be much more together than his brother, slowly unravel. That rage did take over at one point when he was a kid and he beat his father so badly that he was in the hospital for two months and Terry was sent off to a juvenile facility for four years.

Terry tracks down Todd who now owns a small miniature golf course and a restaurant.  Todd’s 15-year-old daughter Jennifer is played by Annie Chernecky, who combines the giddiness of a young teenager with the sexuality of an older woman in the “Lolita,” tradition.

The scene between Jennifer and Terry is perhaps the most terrifying as we see a very controlled, almost happy Terry engaging in flirtatious conversation with this young girl who is basically an airhead.  With the subtext screaming as loudly as the text, one became very concerned about what Terry was going to do with this little seductress.  This could be a moment of revenge. Why not have sex with little girl as a way of getting back at Todd. The shocking moment for Terry is when she shares that her daddy calls her “Buddy,” which is also the name of this miniature golf course.  She doesn’t like to be called Buddy and prefers to be called Jay, short for Jennifer. She consents to go for a ride with this total stranger and the fear for her safety becomes very palatable.

The final and perhaps the most revealing scene takes place in Drew’s garden, beautifully transformed from the “First Step” hospital garden. His wife is throwing a “Welcome Home” party for him and called Terry to invite him. He is insulted that Drew didn’t call himself and makes sure that his younger brother knows how he feels. It is in this scene, that all Terry’s bottled up fear and rage spews out like an erupting volcano scattering emotional ash in all directions. He reveals his relationship to Todd and other difficult secrets spill out in one giant emotional cathartic release.

Bringing Terry to life is an extraordinarily talented Aaron McPherson, who delves painfully deep into the complex layers of his character, mining the strong subtext or “unseen motivation” for his erratic behavior.  His conflicts are spot lighted by his mercurial moment-to-moment transitions and razor sharp imagery where the unseen people from his past seem to almost appear on stage with him. The only technical problem with his performance is that his vocal projection was for a much large space and he tended to “cheat front” from time to time.

However, any student of acting could benefit from seeing his performance, as it is a lesson on how not to play the text.

Brilliantly directed by Larry Moss, whose deep understanding of this most complex material generated hair-raising, mesmerizing performances from his very talented cast backed up by an excellent production design crew including Sound Design by Cricket S. Myers, Lighting Design by Watson Bradshaw, and Costume Design by Kimberly Overton.

Once again, gifted playwright Neil LaBute has used his extraordinary command of language, coupled with deep insights into the agony of the traumatic experiences inherent in the human condition, to create yet another masterful evening of theatre.

Run: Wednesdays thru Saturdays at 8 pm

By mirrormmg August 6, 2014
in Life and Arts
Related Posts