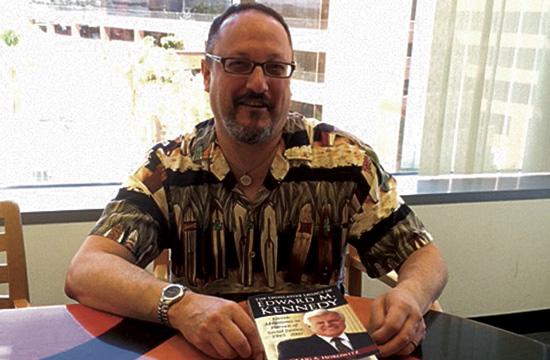 For Santa Monica resident Craig Horowitz, his recently published book “The Legislative Legacy of Edward M. Kennedy” is an achievement five years in the making.

Horowitz, who has been practicing employment law for 27 years, said one of his passions had always been history.

In the back of his mind, he said he “always wanted to go back and write history.”

For Horowitz, choosing a topic had to do with looking for an existing information lapse.

“I was looking for a topic to dive into and I knew that everything in the world had been written about John F. Kennedy and Robert Kennedy, but I didn’t see very much about Ted Kennedy,” Horowitz said.

Thus, Ted became his focus for the book, which took five years to research and put together.

“I started reading the books that were out there about him and I found that they were either completely in his favor and he was a hero or they were completely negative and he was a criminal. I decided I wanted to do my own research and figure out what the truth was.”

A lot of his goals surrounded presenting the best version of the truth he could compile.

He does admit that he’s “always admired the Kennedys,” but said he kept an open mind and took a balanced approach to recording what Senator Kennedy achieved and what he didn’t achieve.

He credits a lot of the book’s successful narrative to the advice of his former history mentor at Brown University, where he attended, as well as a history teacher at Brown, who is now a famous historian.

“They got me on the path of writing the book narrower,” he said.

Pointing out that a sweeping history of Ted Kennedy throughout all of his 49 years in the legislature would be much too broad, his mentors guided him to focus on the aspects of Ted’s career Horowitz could most relate to as a lawyer: his 11 major pieces of legislation.

“Since I am a lawyer, every piece of legislation I printed out – and these are hundreds of pages long – I analyzed and tried to distill down so that it would be readable and interesting for non-academics, but also for academics,” he said.

His book is currently in 115 college libraries – a number that grows every day.

When writing the book, he took the time to look over each and every law that Ted Kennedy enacted, even older and not readily accessible ones, so as to make himself a more credible author.

“I think it just gives so much more credit to a book and to an analysis when instead of these folks on TV who give talking points that I actually read it,” he said. “What I write is a lot of quoting actual laws and the text of the laws that went into effect.”

When asked if he had plans to write another book in the future, he responded by saying “Oh, definitely.”

“This book was written over five years with a full time law practice and three teenagers in the house,” he said. “Now one’s not a teenager anymore and all three are going to college this year. It took nights and Sunday afternoons [to write this book] and I’m hoping that for my next book I’ll be able to devote more time to it since my kids will be in college.”

He concludes by saying that he’s “not planning on scaling back the law practice yet, but at some point I will try and devote more time – I just love writing history.”

The book, which is published by McFarland & Company, can be purchased for $35 online at www.mcfarlandbooks.com.

By mirrormmg August 30, 2014
in Life and Arts
Related Posts