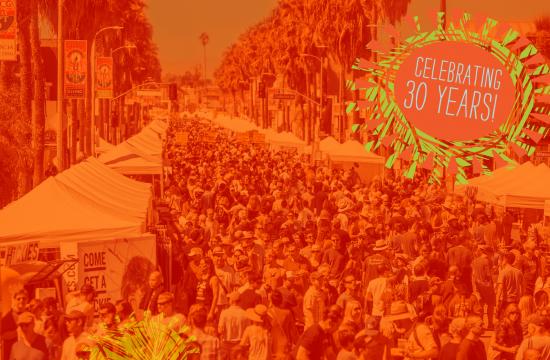 The annual Abbot Kinney Festival returns for its 30th year this Sunday, Sept. 28 from 10 am to 6 pm toasting to the best of world-famous Abbot Kinney Boulevard.

“Since its inception, the Abbot Kinney Festival has represented the incredible solidarity within this colorful neighborhood — and, each year, we show our appreciation by reinvesting all proceeds back into the Venice community,” Humphrey said.

Highlights this year include:

Starting in 1984, the AKFA, in addition to awarding community grants (11 and counting this year), has recognized exemplary residents and stakeholders nominated by the community for their contributions to the spirit, creativity and uniqueness of Venice.

The first Spirit of Venice Award was presented in 1989 to descendants of Abbot Kinney, the founder of Venice, CA. Also that year, West Washington Boulevard was renamed to Abbot Kinney Boulevard in his honor.

Awardees this year include:

Renowned artists and awardees Ed Moses, Tom Everhart, and Laddie John Dill commemorate the 30th anniversary of the festival with exclusive artwork, available for sale as t-shirts, posters, and more at the official festival merchandise booth.

The festival caters to kids of all ages with its dedicated KidsQuad, located in the expansive outdoor field of Westminster Elementary, right on Abbot Kinney. Kicking off with a festive parade to usher in the festival at 9:45 am, the family fanfare continues all day, featuring:

By mirrormmg September 27, 2014
in Life and Arts
Related Posts