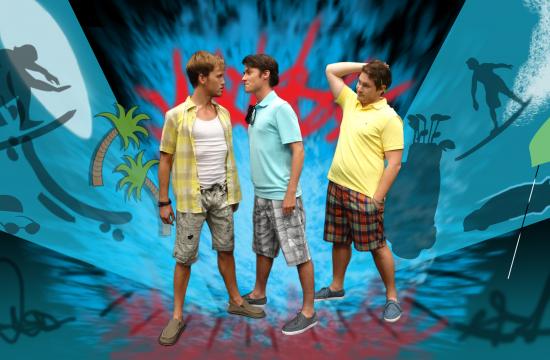 Santa Monica College will next month present “Locals Only!” – a world premiere musical written by the Emmy Award-winning creator of the smash hit “High School Musical” – Oct. 3 through 19 in the SMC Main Stage, 1900 Pico Blvd.

“Locals Only!,” a multimedia extravaganza involving talented students from throughout the campus, as well as professionals, is a love story and clash between the Venice-Santa Monica surfer culture and life in the Valley. “Locals Only” refers to the phrase often used by surfers to mark their beach territory.

“A musical by nature is collaborative, but I wanted this to be a production that reached deep into the campus, across many disciplines,” said SMC President Dr. Chui L. Tsang, who brought the project to the college. “It’s rewarding to see that students in film, animation, photography, cosmetology, art, business, computer science and other departments have contributed so much, alongside those in theatre, dance and music. The college has never embarked on a multi-disciplinary program as wide ranging as this, and to see it come together is very exciting.”

With book and concept by Bill Borden and music by a host of songwriters he has collaborated with previously, “Locals Only!” is directed by Perviz Sawoski, chair of the Theatre Arts Department. Choreography is by dance professor Mark Tomasic and music direction by Gary Gray from the Music Department.

Featuring more than a dozen songs – from energetic, foot-stomping numbers to ballads – “Locals Only!” tells the story of Buzz (Harrison Meloney), a young surfer who falls in love with Ariel (Autumn Powers), a “Valley Girl” from a sheltered, privileged background. Filled with colorful characters, the 90-minute musical reveals the inevitable conflicts when different worlds collide.

“This show is going to be really fun, and our talented cast and multimedia projections will make the story fly off the stage,” Sawoski said. “It’s been an incredible journey to collaborate with Bill Borden on developing the script, work with the wonderfully talented Mark Tomasic and Gary Gray, and see the excellent contributions being made by students and faculty from many departments.”

Specifically, film students have been shooting footage that will be projected on an onstage screen; photography students are taking promotional shots from the beach to the rehearsal hall; cosmetology students have made hair extensions and are assisting with hair and makeup; business students have developed marketing plans; and computer science students have launched social media projects for the show.

In addition, art student Pace has created a group of animated murals (with the help of the Entertainment Technology Department) that will be projected onstage and serve as stunning backdrops for the show. (A Venice Beach mural also plays a key role in the musical’s plot.)

“I’ve been so impressed with the talents and enthusiasm of students across disciplines who have contributed to this project,” said Dean of Academic Affairs Erica LeBlanc, the production coordinator for “Locals Only!”

“We’ve also had wonderful corporate support from Dive N’ Surf in Redondo Beach, which has donated bathing suits, wetsuits and beachwear,” she said.

Aside from creating and executive producing the Disney Channel’s “High School Musical” series, Borden, of Santa Monica, counts among his myriad feature film producing credits “End of Days,” “Get on the Bus,” “Desperado,” “The Cure,” “A Midnight Clear,” “The Man in the Moon,” “La Bamba,” “White Nights”, “Home of Our Own” and “Against All Odds.”

Sawoski is an award-winning director as well as a performer, choreographer and teacher. Several of the plays she has directed at SMC have been selected for the prestigious Kennedy Center/American College Theatre Festival, at the regional and national levels.

Tomasic has worked with a variety of internationally renowned dance companies and choreographers in his 20-plus-year career as a professional dancer. At SMC he teaches modern dance, ballet and dance history, and he co-directs Synapse Dance Theater, the student modern dance ensemble. Gray is entering his 34th year at SMC. A specialist in musical theatre, he has accompanied, musically directed or conducted more than 100 productions, many of them at SMC.

Performances are 8 pm Fridays, 2 pm and 8 pm Saturdays (except there will be no 2 pm matinee Oct. 4) and 2 pm Sundays. A preview performance will be at 8 pm Thursday, Oct. 2.

By mirrormmg September 25, 2014
in Life and Arts
Related Posts