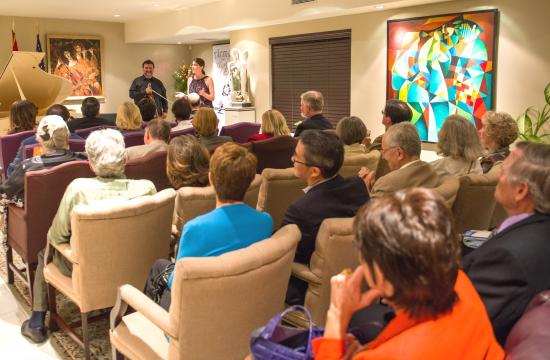 It’s not too late to secure tickets to the remaining four evenings at other Consul General residences spotted across the Westside.

LACO executive director Rachel Fine said she had been thrilled to see the series blossom during the past few years.

“The Los Angeles Chamber Orchestra has always been very international in scope and ambition and we felt it was important to have a connection to the Consul Generals and their respective cultures in the city through the music that we present,” Fine said.

Fine said each of the evenings that start at 7 pm average between 40 and 70 guests so the setting is kept intimate.

“It’s a great musical evening, but it’s also a great cultural evening,” she said. “As far as I know, I don’t know if any other organization does a series like this, so it’s very distinctive. I think there’s a series in Washington, D.C. that presents musical evenings at the homes of the ambassadors, but that’s the only one that I know of.”

Fine said LACO presents chamber music, which is often meant to be heard in a salon setting like a living room or some kind of a parlor.

“We really try to create that type of experience; hearing the music in the way it was originally meant to be heard,” she said. “Also, our musicians aren’t just performing at the evenings. They are engaging with and dining with everyone who’s there, so it’s also about getting to know our artists and the people that we present on the stage and that makes it very special.”

By mirrormmg September 24, 2014
in Life and Arts
Related Posts