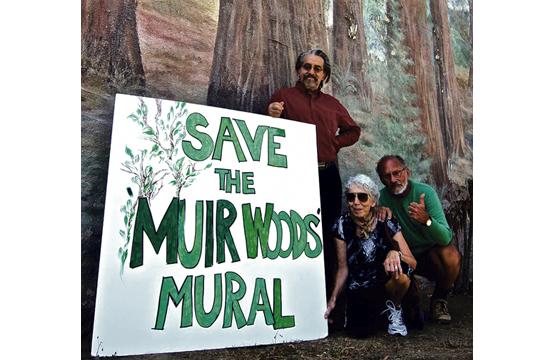 The future of the Muir Woods mural that adorns the Lincoln Blvd. and Ocean Park corner of Olympic High School in Santa Monica is uncertain, with parties for and against the current design, heading to mediation.

The mural was created in 1978 in honor of conservationist John Muir, the original namesake of Olympic High, which was previously known as John Muir Elementary. In recent times the wall has fallen into disrepair, with all agreeing that a facelift of sorts is in order.

Santa Monica-Malibu Unified School District officials are proposing a new painting for the space, a move that has activist Jerry Rubin and the Campaign to Save the Muir Woods Mural community group up in arms.

Rubin said that the design remains significant in this day and age, with climate issues constantly on the agenda.

“It’s an extremely creative, inspirational and important public artwork that should be respectfully preserved,” Rubin said. “The mural’s pro-nature and pro-redwood tree aesthetic is magnificent. Its environmental theme is just as important today, if not more so, than when it was first painted 36 years ago.”

The issue went before the Santa Monica Arts Commission Monday Sept. 15, with all sides of the debate having their say.

“Commissioners felt they learned a lot about the mural and the process that the School District and Olympic High School are currently engaged in around the future of the mural,” staff for the Arts Commission stated. “They wished all parties well and did not elect to take any action.”

Principal of Olympic High School, Janie Yuguchi Gates said that she is “hopeful and optimistic” about mediation proceedings.

“It’s an extremely positive process,” agreed Rubin, “hopefully it will yield a more cooperative bridge-building win-win outcome for the school and the community.”

“We’ve all met the mediator and have agreed to respectful ground rules,” Rubin said. “We are seeking an understanding that will fully and respectfully preserve the Muir Woods mural while also finding other walls at the school and in the nearby community on Lincoln Blvd. for Olympic High School student expressive artwork.”

Original Muir Woods mural artist Jane Golden stressed that she hopes both students and the community benefit from the outcome.

“We use art to engage and inspire and connect and lift-up,” Golden said, “and sometimes to unite.”

Now residing in Philadelphia where she is Executive Director of the leading Mural Arts Program, Golden said that she hopes the situation is worked out so all sides are happy.

“I don’t want the mural to be a point of contention,” she said.

“Public art creation is complex,” Golden explained. Adding that she is honored by support of so many people wanting to keep her work on the walls and that if the work could be saved, it would be “wonderful.”

She hopes that the issue will inspire kids at Olympic High to engage in the process while highlighting the relevance of climate change and community.

A public rally to save the Muir Woods mural was organized earlier this month, with 50 supporters uniting to save the art work.

“Our Save the Muir Woods mural public demonstration was energetic and unifying,” Rubin said. “Supporters of all ages inscribed in the large message card their personal thoughts and feelings supporting saving and restoring the Muir Woods mural…Auto horns honked constantly as they drove by to show their support.”

This year marks the 100th anniversary of the passing of John Muir. Muir was the founding member of the Sierra Club, with the West Los Angeles Group lending their support to the campaign in an open letter.

“We feel the mural is a creative, important and beautiful artwork with a timely environmental and tree-themed vision,” said group chair David Haake.

“It represents the importance of a connection with nature for the community and the students at the Olympic High school site.”

By mirrormmg September 19, 2014
in Life and Arts
Related Posts