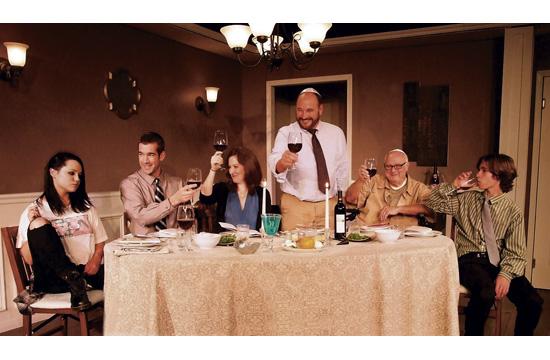 There are traditional Passover Seders and then there are Passover Seders of a different kind. One of the recent depictions of this 2000-year-old tradition, was the one presented in the West Coast Jewish Theatre’s production of “The Whipping Man,” in which the Seder was conducted by Simon, a newly freed slave whose owners were Jewish and whose religion and its practices he embraced as his own.

The most recent portrayal of this family-oriented ritual is taking place on stage at the Ruskin Group Theatre in Robin Uriel Russin’s “The Face in the Reeds.”

Like the Simon character in “The Whipping Man,” the playwright’s character of Christina (Stacey Moseley) is a Christian who has converted to Judaism.

The play opens with her breaking the fourth wall and sharing her emotional conversion experience at the traditional “Mikvah,” best described as holy water used for multiple purposes, but at its heart, for cleansing and purification which protects and symbolically serves to welcome the convert as a Jew.

As a newly converted Christian to Judaism, a most anxious Christina is hectically preparing her very first Seder table for the family for what she thinks will be an opportunity to celebrate the exodus of the oppressed Jews from Egypt, but in fact, turns out to be anything but a happy family gathering.

She is very stressed and races around her living room and dining room, beautifully designed by Amy Ramirez, cleaning up any bits of crumbs on the floor, as her wise-guy, but lovable 13-year-old son Mose (Aidan Blain) teases her with questions about the authenticity of this tradition and throughout the evening serves as the “Doubting Thomas” casting aspersions on what he considers rituals based on myths. So laughter abounds with Mose serving as the comic foil for most of the two-act play.

Christina is married to Barry (Chip Bolcik), a pleasant man who is a practicing ob/gyn physician and has provided a good life for his family.

Now we have Rachel (Julia Arian), the very angry daughter from Barry’s first marriage, who has quite reluctantly come home from college for the holiday.

Dressed in torn blue jeans and a Led Zeppelin tee shirt, her defiant appearance telegraphs just how she feels about the family, especially her father, the rituals, and society in general.

She does everything she can to make a mockery of Christina’s Seder and turns the tradition upside down by insisting that the family use her revised “Haggadah,” the ancient book that retells the story of the exodus of the Jews from Egypt.

The text now is feminist, and the male references have been changed to female, covering everything from women’s and civil rights, the downtrodden and outcasts of society, as well as the gay and lesbian population.

Barry, in his attempt to please her, does read from her version, which accounts for a lot of the laugh lines.

Rachel, an almost one-note character, thinks she is a rebel with a cause.

For example, in addition to having a sex identity problem, she’s furious with her father for sending her to a very expensive college, which he points out was her choice, not his.

She furiously barks out that other students were accepted based on their merit, with some winning scholarships in addition to which, had to supplement their tuition with student loans.

One could easily conclude that here’s one heck of an ungrateful, spoiled brat as Russin’s narrative, coupled with Sarah Figoten Wilson’s direction, didn’t peel away the multi-layers of her character to reveal the subtext motivating her behavior.

Late in the play we do get an ever-so-brief glimpse at the reasons for her hostility, but even when she reveals her hurt, it’s still done with a nasty edge.

Playing anger for most of the play makes Rachel’s character quite unsympathetic. And, speaking of playing the anger, now we have Barry’s nasty old father, Sol (Paul Zegler), an infirmed, but cantankerous old man whose one-dimensional bitterness and sarcasm wears thin which, again, is due in part to not having enough layers to peel back.

Even when he shares a painful secret about his health and his desired remedy, he remains unsympathetic and again, quite one dimensional without any arc to his character.

The final guest at this dysfunctional Seder table is Patrick (Tom Berklund), a resident physician and colleague at Barry’s hospital who was invited for a possible match with the viper Rachel.

Oil and water would be an apt description of how Rachel interacts with the only character devoid of anger and we see absolutely no motivation for her treatment of him to do a radical 360. He is Christian and has never been to a Seder and is rather taken aback by the nasty family dynamic unfolding before him. Throughout the play, the holiday table is the backdrop for the family bloodletting, with each member either being the attacker or “attackee,” at some point.

But wait, lest you think this is an evening of intense drama, while serious moments do abound, Russin has sprinkled in a lot of comic relief, some bordering on sitcom one-liners, including the cliché spoken by Patrick: “Put six Jews in a room and you’ll get six opinions.” A good question to ask about now, is do you have to be Jewish to enjoy this play and the answer is no.  The pent-up resentments, unmet needs, and conflicts revealed by this family are pretty universal because you don’t have to be Jewish to have a screwed-up family. Oh yes. The title of the play, “The Face in the Reeds” is an interesting Biblical reference that you might find surprising, so despite some of the flaws, both in the writing and direction, it’s worth seeing this play for the ideas Russin tries to put forth in his flawed, but still interesting play.

By mirrormmg September 4, 2014
in Life and Arts
Related Posts