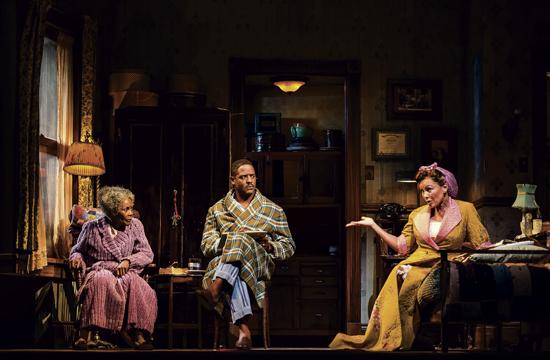 Cicely Tyson as Mrs. Carrie Watts brilliantly shines in Horton Foote’s “The Trip to Bountiful,” a revival production currently on stage at the Ahmanson Theatre. Directed with surgical precision by Michael Wilson, Foote’s iconic script was enough to entice Miss Tyson back to the Broadway stage after a 30-year break, which was rewarded with a Best Actress Tony Award.

The genesis of Foote’s superb play began as a teleplay in 1953 with Lillian Gish in the starring role. Subsequently, Geraldine Paige starred in the 1985 film version for which she won an Oscar for Best Actress.

The story revolves around Mrs. Carrie Watts, who lives in a small Houston apartment with her son Ludie Watts, well played by Blair Underwood, and his self-centered nagging wife Jessie Mae, appropriately rendered by Vanessa Williams.

Jessie Mae likes to spend her time going to the beauty parlor or sipping Coca Cola with her friend at the drugstore. Her indulgences are financed in large part through the government check Mrs. Watts receives every month. The continuous search for that check becomes a game of cat and mouse as Jessie Mae thinks her mother-in-law is hiding the check, which indeed, she is.

Mrs. Watts has one dream to fulfill before she dies and that is to return to Bountiful, a small Texas town where she grew up. Concerned about her health and her “sinking spells,” Ludie discourages her from making what he considers an arduous journey, which appears she’s tried many times but gets caught before she can complete her mission.

The curtain rises on Jeff Cowie’s spectacular, cramped two-room split level set, which later morphs into a Greyhound bus waiting room, as well as the old lady’s childhood home. Each setting is enhanced by Rui Rita’s Lighting Design, as well as John Gromada’s Original Music and Sound Design, and with the action set in the 1940s, Van Broughton Ramsey’s costume designs are perfect for that era.

It is late at night and Mrs. Watts is seated in a rocking chair, gazing out the window, quietly humming a spiritual. She looks incredibly frail and one would think she could be easily dominated. Ha! Ludie, who is not as successful as he would like to be, also can’t sleep and soon joins his mother and they chat. As old as she is, momma offers to get milk for her very respectful son, who calls her ma’am, and shuffles off to the kitchen returning with a glass of milk in hand. It should be noted that her “shuffle” changes with a varying degree of speed, telegraphing exactly what she’s feeling about something and it’s quite hilarious. Poor Ludie. He has to always referee the mostly-cantankerous relationship between the two women with whom he lives. Jessie Mae is awakened and joins them, asking her mother-in-law where she put the recipe she gave her. A hilarious hunt begins with the old lady being forced by her son to apologize to his wife. But, this is one determined, unstoppable octogenarian and all bets are on her.

Dressed in an old robe, this sprightly – when it pleases her – extremely clever old woman, who feigns cooperation and obedience, has a plan that is about to be set into motion. When the coast is clear, she removes her somewhat tattered robe revealing a nice dress. She goes to her closet and takes out a suitcase which she very quietly packs, and with the government check safely hidden in her bra, she gingerly sneaks out of the house to catch a bus to Bountiful.

Alas, because there is no direct bus to Bountiful from Houston, she has to take a bus to Harrison and on her way makes friends with a most endearing young woman who is headed home to stay with her parents because her husband is in the service. Jurnee Smollett-Bell’s character of Thelma is so sincere and loving to Mrs. Watts that she could almost be the daughter she never had. Our feisty protagonist faces yet another obstacle as, after she arrives at the Houston Greyhound Bus Station, which, by the way, bears a “Colored Only” sign, she finds out this there is no bus stop in Bountiful and says she’ll walk there.

The cat-and-mouse game continues as Jessie Mae calls the police and the ultimately sympathetic sheriff, played by Devon Abner, tracks her down at the bus station where she is asleep on a bench.

Towering over this frail, elderly woman, after hearing her plea to revisit her childhood home, which she has not seen in 20 years, the sheriff relents and takes her to Bountiful so that she can have one last look at her birthplace, which now is overgrown with weeds and the house is in total disrepair. But, to her, it is still beautiful and her dream, after so many aborted attempts to get home, has finally come to fruition.  Her spirit is a tribute to keep moving forward no matter what obstacles or tragedies one experiences – either in the past or the present.

Cicely Tyson’s performance is a fantastic acting lesson – a primer on the use of one’s body to reveal inner feelings that do not require words. She plays her physical being like a musical instrument, utilizing varying tones to signal displeasure or disobedience. Finally, she is the queen of the hilarious use of props – such as a hand-held fan that she flutters in different rhythms, again, to signal inner feelings and non-verbal comments.  Not a word is necessary. Miss Tyson should be declared a rare, national treasure as her performance as Mrs. Carrie Watts will stand as one of the most iconic performances to grace the American stage. At the very end, after satisfying her dream, Mrs. Watts says: “I’m a happy woman” and indeed, as they sprung to their feet at the final scene, this was one happy audience.

By mirrormmg October 15, 2014
in Life and Arts
Related Posts