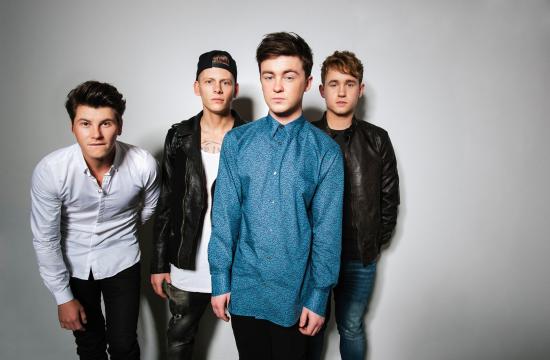 The band will include a performance of their new single, “Wait On Me” from their debut album, “Let The Road” set for release on Jan. 6 on School Boy/Giant Little Man/Mad Love/Interscope Records.

In March, Rixton released their debut EP “Me And My Broken Heart” featuring their buzzworthy platinum selling single of the same title.

The single cracked the Top 10 at Pop radio and ranks as a No. 1 Most Shazam-ed new track in the U.S., while the official video, has racked up over 27 million views on YouTube/VEVO.

Rixton has delivered killer performances on Late Night With Seth Meyers, The Voice, Ellen, So You Think You Can Dance, and The TODAY Show, and more.

Rixton has been featured as an MTV 2014 “Artist To Watch” and a VEVO LIFT artist, and “Me And My Broken Heart” was chosen as an iTunes Single of the Week.

The band, who hails from Manchester, recently released their follow up single “Wait On Me.”

Inspired by the soulful pop sounds of Maroon 5 and Bruno Mars, Rixton offer up a wealth of addictive pop/rock/R&B built on their own brand of songwriting, instrumentation, and vocal harmonies.

The band will also set out on a North American tour with Ariana Grande kicking-off in 2015. For more information about Rixton, visit www.RixtonBand.com.

The live concert is free and open to the public and can also be seen streaming live for one night only on Santa Monica Place’s YouTube channel, www.youtube.com/santamonicaplace. For more information, please visit, www.santamonicaplace.com.

By mirrormmg October 7, 2014
in Life and Arts
Related Posts