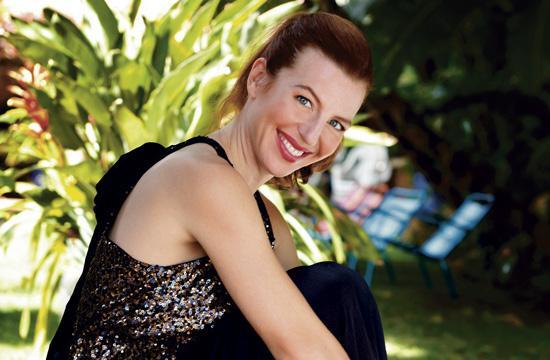 Tanna Frederick, a Santa Monica actress, will be starring in Henry Jaglom’s new play “Train to Zakopané” which tackles the issues of love and anti-Semitism in interwar Poland, on stage at the Edgemar Center for the Arts on Main Street in Santa Monica.

The production will have its opening weekend Friday, Nov. 14 and Saturday, Nov. 15.

The play is based on a personal experience of Jaglom’s father – a Jewish passenger on a train en route to northern Poland – having to share a cabin with an anti-Semitic nurse. The play takes place in 1928, 11 years before the invasion of Poland and subsequent beginning World War II in 1939. It was a period of tremendous anti-Semitism in most of Eastern Europe.

“I’ve done research of that specific time and that character, and the socio-political attitudes in that time in that specific region,” said the Iowa native. “But mostly, it’s been me, really trying to find something personal that I am incredibly political about – which has been really difficult for me to put myself in the character’s shoes.”

The playwright chose her for the part, saying that it will be “one of [Frederick’s] most difficult, challenging, and greatest roles.”

She enjoys playing antagonists because of the challenge of making the characters relatable and human.

Growing up in Mason City, Frederick started performing at the Stebens’ Children’s Theatre in fourth grade. After completing her courses at Mason City High School in 1995, she moved 165 miles southeast to Iowa City to attend the University of Iowa.

She graduated in 1995 with a double major in theatre and political sciences.

“The law thing was very much a thing my dad really wanted me to do, and I was particularly interested in doing something with the U.N.,” said the valedictorian. “But honestly… it’s one of those things that, I cannot survive without acting.”

In 2008, Frederick started a non-profit, Project Save Our Surf (PSOS), with South African surfer Shaun Tomson to clean up the ocean. Through the organization, they delivered water filters to places where clean water is considered a luxury. She also started a well at an AIDS orphanage in Johannesburg, South Africa. PSOS also sends underprivileged kids in schools that have no room in their budget for field trips on trips to the ocean.

“These kids are from Anaheim, and they haven’t seen a stinkbug before,” said the actress.

Each year, the organization strives to send 5,000 kids to summer camp. They set up a camp in the mountains near Silverado, CA, called Camp PSOS. Administered by an organization Inside the Outdoors, it allows inner-city youths to experience Southern California’s wetlands and wilderness.

Edgemar Center for the Arts is located at 2437 Main Street, Santa Monica.

There will be two gala opening weekend performances on Friday, Nov. 14 and Nov. 15. It will runs through Sunday, Dec. 14 (dark Nov. 27 for Thanksgiving).

The Edgemar Center for the Arts is located at 2437 Main Street, Santa Monica.

By mirrormmg October 31, 2014
in Life and Arts
Related Posts