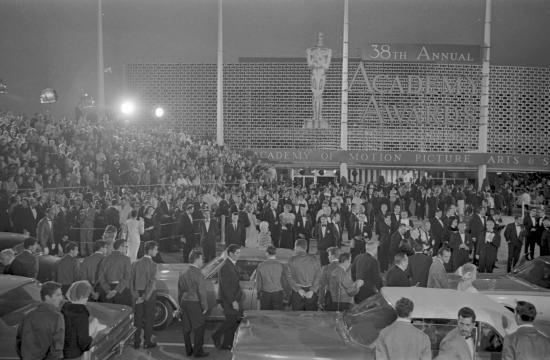 In the summer of 1958, Santa Monica inaugurated a 3,000 seat cultural mecca, just two blocks from the ocean.

Throughout its 55 years as a cultural venue, the Civic hosted everything from the concerts of Eric Clapton, the Beach Boys, and Marvin Gaye to the Academy Awards of the 1960s to the Dalai Lama’s “Wheel of Time” initiation ceremony.

From its celebrated mid-century modern International Style architecture to its innovative main floor, the Civic was adaptable to a variety of cultural affairs.

Cultural Mecca will explore the social and cultural impact the Civic had on Santa Monica’s and greater Los Angeles’ cultural fabric.

Supported by historical photographs and artifacts, visitors will return to the cultural mecca of the Santa Monica Civic Auditorium.

The exhibit will highlight the performances hosted by the Civic Auditorium, including the TAMI Show in 1964, the Academy Awards in the 1960s, and the pop and rock bands from the 1970s into the 2000s.

Museum Manager and Exhibit Curator, Danielle Lewis states “The Civic really was a dynamic cultural center for the city of Santa Monica.

What fascinates me most about it is that you can trace the evolution of popular music through the performers at the Civic.

From the big name performers of the 60s and 70s to the punk scene that breathed new life into the venue in the 80s, the Civic is a really good barometer of the music scene in Los Angeles and Santa Monica.”

The museum is open Tuesday and Thursday from noon to 8 pm, Wednesday, Friday and Saturday from 10 am to 5 pm. It is closed on Sunday and Monday.

By mirrormmg November 6, 2014
in Life and Arts
Related Posts