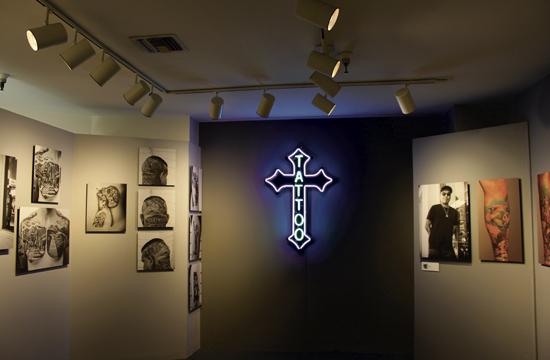 The museum hosted the 2014 annual Heritage Awards Dinner on Friday, Nov. 14, which honored Mahoney and his fellow artists. Los Lobos and LP3, with Shamrock tattoo artist Louie Perez, performed at the event.

The lower portion of the museum was decorated to look like Shamrock and have the same feel. There is a pool table that is similar to the one at the tattoo parlor, but slightly larger.

“You go to Shamrock, and instead of being bored… there is a pool table waiting for you, and there’s seat and there’s notebooks,” said Tobi Smith, the museum’s executive director. “Each artist that works at Shamrock has a notebook you can flip through and get ideas.”

There is also a small room with ink from the company Intenze glued to the counters, as well as the Shamrock’s proprietor’s own ink from Intenze called Gangster Grey.

The room is lined with examples of tattoos that customers can chose to get done, and fits the health codes for making tattoos.

On the other side, there is a room decorated with the desks and work stations of the different artists. They were decorated with stickers, ink containers, chairs, and other personal items. Some of the pieces were given to the museum to use from Shamrock, and others were acquired elsewhere.

“Each station has its own personality, whether it be Asian, whether it would have a Mexican feel…” said Smith. “This exact thing is at Shamrock, so you might have fun going over there.”

Up the stairs and past the black and white photo of Mahoney and his artists outside the shop, and a neon sign with the word “TATTOO” over a three-leaf clover, there is the main exhibit.

It consists of photographs by Markus Cuff of the artists and their work. It is divided by the artist, and has a separate room for sleeves, or tattoos that cover the arm, as well a room where a 17-minute video plays of Mahoney making a tattoo from start to finish.

Mahoney visited the museum and enjoyed what he saw. He began tattooing in Boston at a time when it was illegal, and is excited to see how public perception of tattooing has changed, and that the exhibition is “symbolic of what’s happened to the tattoo world.”

Santa Monica is a “tattoo-free” city, in that opening up a tattoo studio is illegal in the city. Hermosa Beach had a ban on tattooing until 2010, when the ban was found unconstitutional on the grounds of freedom of expression.

“I was told by one of the departments in the city that Santa Monica’s non-tattoo status is going to be also contested,” Smith told The Mirror.

The California Heritage Museum is located at 2612 Main Street in Santa Monica.

It is open Wednesday through Sunday from 11 am to 4 pm. Parking is free and handicapped facilities are available. On Sundays, the museum hosts a Farmer’s Market in its parking lot. Parking can be found in adjacent “hourly rate” parking lots.

By mirrormmg November 25, 2014
in Life and Arts
Related Posts