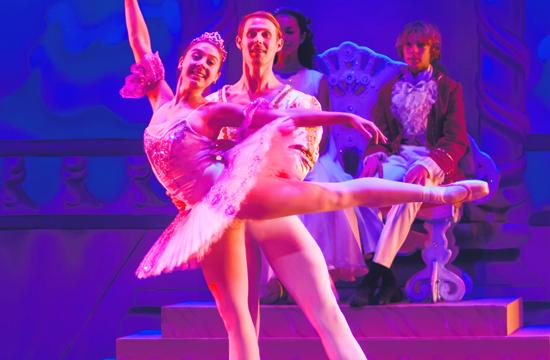 The Westside Ballet of Santa Monica is bringing festive delight in the form of the classic “Nutcracker” at the Broad Stage.

Due to a high demand for tickets, Westside Ballet added these shows for a total of nine performances this year.

The popularity of this production began back in 1973, meaning that the Westside Ballet of Santa Monica has produced “Nutcracker” for decades.

However, it is only the second season of performances for artistic director Martine Harley, who trained at the Westside Ballet as a child and was taught by the founder of the dance company herself.

“I grew up here at Westside Ballet,” Harley said. “I grew up in this production of the ‘Nutcracker’ from the time I was a little girl, and danced my way through all the roles from Clara to the Sugarplum Fairy. It feels like coming home for me. I feel like I’ve been part of it my whole life.”

After taking the baton as artistic director, Harley expressed her sentiments toward her role and the production.

“I’ve taken over for my mentor, Yvonne Mounsey, who was the founder of our company,” Harley said. “It’s been such an honor and a privilege to take this company forward.”

Harley has been able to balance adding her own personal touches as well as keeping the traditional elements of the Westside Ballet’s version of “Nutcracker.”

“It’s a very classically based version, very much what the story was intended to be originally,” Harley said.

The Westside Ballet of Santa Monica is annually known for its collaboration with the Santa Monica College Symphony, resulting in a backdrop of live classical music as opposed to the conventional recordings that are normally used.

“My greatest joy as artistic director is getting to that point on stage when they’re so excited to hear the music and put on their costumes and bring all of that effort to life,” Harley said. “I enjoy bringing the dancers through the production process, from the very first days when we audition everyone to all the vigorous rehearsals. It is something I really enjoyed as a child – and I love bringing it to them.”

With a cast of about 150 dancers – who are primarily all from Santa Monica and the surrounding communities – the Westside Ballet is comprised of local students excited to bring their hometowns a bit of holiday cheer.

“In addition to having performances for the general public, we do community outreach where we invite children in from various schools,” Harley said. “The children have a chance to experience classical music and ballet, most of them for the first time. It was really important to Yvonne Mounsey that we bring art to the Santa Monica community and to expose these children to this incredible art form.”

Above all, Harley prioritizes the well being of all of her students amidst the flurry of shows that they must power through.

“There are nine performances for the public and two community outreach performances, so it’s important that the students maintain their health. We have incredible parent volunteers and quiet rooms to study in between performances,” Harley said. “It’s really all about the students.”

The team of hard-working, young dancers will be persisting through their respective finals weeks and academic schedules to uphold the high quality of the “Nutcracker.” This season, the production will be featuring professional ballerinas and Westside alumnae Joy Womack and Lyrica Blankfein as well as Santa Monica High School student Kaylene Garcia as Sugarplum Fairy.

Westside Ballet is located at 1709 Stewart St. in Santa Monica.

By mirrormmg December 19, 2014
in Life and Arts
Related Posts