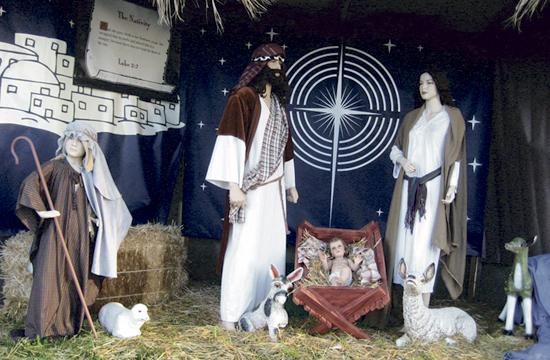 Santa Monica’s controversial nativity installations will be unveiled for their annual Christmas display in the Ocean Park neighborhood this Sunday, Dec. 14. The lifesized Nativity Scenes grabbed national attention two years ago after efforts were successfully made to ban them from public land.

A community tradition since 1953, the 13 scenes are calling Mount Olive Lutheran Church at 1343 Ocean Park Boulevard (at 14th Street) home for the second year in a row, while legal proceedings to return them to Palisades Park continue.

Nativity Scenes Committee Chairman Hunter Jameson said that he is pleased that residents and visitors will have the chance to enjoy the display.

“We are deeply grateful to the people of Mount Olive Lutheran Church and Pastor Eric Shafer for providing a place for a second year for Santa Monica’s distinctive ‘Christmas Story’ to spread the message of love, joy, hope, and peace,” Jameson said.

While the physical display of the Scenes will be at the church, the opening of this year’s event will be at their original home, Palisades Park, along Ocean Boulevard near the foot of Arizona Avenue.

“It’s going to be a great event with a very celebratory atmosphere,” Jameson said. “People can say hi to old friends, and make new ones and there are always lots of kids running around… It’s a great birthday party!”

The event will also honor longtime supporters Dr. Lawrence and Kari Czer of Santa Monica. Kari Czer has long been a representative of The Lighthouse Church on the Scenes Committee and organizes the opening ceremony every year.

She and her husband open their home as site for Committee meetings, and last year commissioned and donated a 24-foot-long banner, “The Christmas Story.”

The nearly 5-foot-tall banner is a compact version of the Nativity Scenes, displaying photos of many of the Scenes accompanied by scriptures and narrations. It will be on display at the opening ceremony as a reminder of the Scenes’ original home.

“Kari has been tireless in promoting the Scenes,” Jameson said. “We are deeply thankful for her and her husband’s efforts.”

A new addition to the physical scenes this year will be provided by St. Peter & St. Paul Coptic Orthodox Church of Santa Monica, and its pastor, the Rev. Paul Megally. The church is responsible for Scene 11, “Joseph’s Dream.”

The Egyptian connection in the scene makes it particularly fitting for a Coptic church with its Egyptian heritage, Jameson said.

“We are delighted to have St. Peter & St. Paul Coptic Orthodox Church join us, and we thank Pacific Crossroads Church, which displayed the scene before retiring from the committee this year,” he added.

While the display will continue to make the best of its current situation, organizers have appealed a U.S. District Court judge’s dismissal of their lawsuit against Santa Monica City for violating constitutional freedoms of speech and religion. A three-judge panel of the Ninth U.S. Circuit Court of Appeals will hear oral arguments in the appeal on Feb. 6 in Pasadena.

By mirrormmg December 12, 2014
in Life and Arts
Related Posts