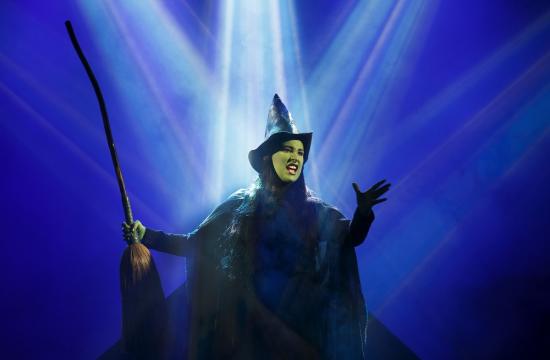 When touring Broadway shows arrive at the Pantages Theatre in Hollywood, most typically stay for just three weeks. Fans of “Wicked” are in for a treat following its return on Wednesday – it will remain for a 14-week engagement through Sunday, March 15, 2015.

A little local history first on this Tony Award winning musical. “Wicked” celebrated a record-breaking L.A. premiere in 2005, which was followed two years later by an extended engagement that would go on to run two years, becoming one of the longest-running Broadway musicals in L.A. history.

It solidified itself as a Los Angeles favorite with its most recent, highly-successful engagement during the 2011 holiday season.

“Wicked” is based on the 1995 book by Gregory Maguire that’s touted as “the untold story of the Witches of Oz.” The musical opens with the citizens of Oz celebrating the death of the Wicked Witch of the West. The plot then becomes a flashback starting from the day two unlikely friends meet.

In what many theater-goers have called a reverse trip down the yellow brick road before Dorothy ever landed in Oz, “Wicked” centers around Elphaba, played by Emma Hunton (who later becomes the Wicked Witch of the West), who is smart, fiery, and misunderstood as she was born with emerald green skin.

When Elphaba is paired to share a room at Shiz University with the beautiful, ambitious, and very popular Galinda, played by Chandra Lee Schwartz, the two begin a journey of many ups and downs.

The story follows their remarkable odyssey and how they become the Wicked Witch of the West and Glinda the Good. Along the way there are many large scale musical acts like “Defying Gravity,” “Dancing Through Life,” and “Thank Goodness” to solos like Galinda’s “I’m Not That Girl” and Elphaba’s “One Short Day.” One of the biggest crowd pleasers was near the end of act II when Glinda and Elphaba join together to sing “For Good” just before the finale featuring the entire cast.

Along the way many of stories about Oz are filled in – like why the wicked witch is green and when the monkeys started flying.

Both leads came across as highly skilled (Note: On opening night the role of Elphaba was played by Hunton’s standby Emmy Raver-Lampman) and truly captured all of the subtle aspects of the personality of their characters.

The evolution of their friendship definitely grew as we see them struggle through opposing personalities and viewpoints, several clashes such as the rivalry over the same love-interest Fiyero (played by Nick Adams), reactions to the Wizard’s (played by Tim Kazurinsky) corrupt government, and, ultimately, Elphaba’s public fall from grace.

The roughly two hours, 30 minutes show (with 15 minute intermission) is a delight and should be on everyone’s holiday wish list.

A lottery will be held for a limited number of $25 orchestra seats daily. Entries will be accepted at the box office beginning two and a half hours prior to each performance; each person will print their name and the number of tickets (1 or 2) they wish to purchase on a card that is provided.

Two hours before curtain, names will be drawn at random for a limited number of tickets priced at $25 each; cash only.

Only one entry is allowed per person. Cards are checked for duplication prior to drawing. Winners must be present at the time of the drawing and show valid ID to purchase tickets. Limit one entry per person and two tickets per winner. Tickets are subject to availability.

The regular performance schedule is Tuesday through Friday at 8 pm, Saturday at 2 pm and 8 pm, and Sunday at 1 pm and 6:30 pm.

Individual tickets start at $35 (the show is recommended for ages 8 and up. Note: no one under 5 will be admitted to the theatre). For tickets more information about Day of Show Lottery, visit www.HollywoodPantages.com/Lottery or call 323.468.3030 for recorded information.

The Pantages Theatre is located at 6233 Hollywood Boulevard, Los Angeles.

By mirrormmg December 13, 2014
in Life and Arts
Related Posts