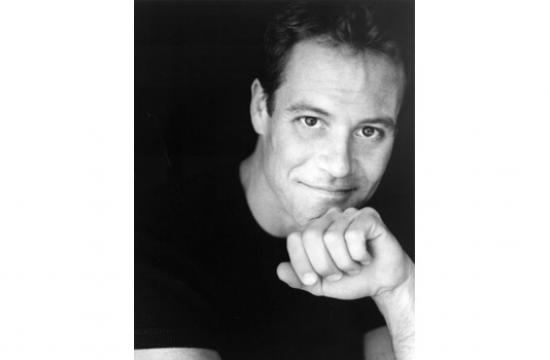 Hershey Felder’s theatrical franchise of musical story telling with photos has made him famous for inhabiting such renowned composers, from Beethoven to Bach, to his latest biographical incarnation of Irving Berlin at the Geffen Playhouse.

He has also produced shows in which children reminisce about their parents, including “The Pianist of Willesden Lane,” in which Mona Golabek tells the story of her mother’s musical odyssey during World War II.

In the same genre, “Jack Lemmon Returns,” created and directed by Felder, is a fascinating 80-minute journey through the life and times of one of America’s eternal cinematic icons, as channeled through his son, Christopher (Chris).

A skilled actor and pianist in his own right, he is a dead ringer for his dad, which almost causes one to gasp at the resemblance.

The Broad Stage’s Black Box Theater has been transformed into an intimate cabaret setting. The walls are covered with giant photos of Jack from some of his most famous films including, “Some Like It Hot,” “Missing,” “Days of Wine and Roses, “Save the Tiger,” and “Mr. Roberts.” A grand piano sits dead center and soft jazz music fills the room.  Before long, Chris enters.

It takes a while for the production to pick up energy, which happens when Chris morphs into his dad, whom he calls “pops.” He totally nails Jack’s speech pattern, capturing his famous stutter as well as his distinctive physical mannerisms.  Because he virtually disappears as himself for most of the show, we don’t find out much about what it was like being Jack’s son. However, the text hints at the fact that it was not always smooth sailing, as Jack put his career before family.

Jack’s story begins with his privileged aristocratic roots in New England, then goes on to describe the journey leading to his incredible success as an actor. He remembers his days at Harvard and his acting experience in the exclusive Hasty Pudding Club, of which he was President.  After graduation, he enlisted in the Navy and eventually followed his passion for acting.

Well known for his comedic timing and physical life, Jack shares how he was greatly influenced by W. C. Fields and French actor Jean-Louis Barrault, who is best known for his role as the mime Baptiste in Marcel Carnés “Children of Paradise” (1945). The influence of their comedy is evident in Jack’s performance as Jerry/Daphne in Billy Wilder’s 1959 classic, “Some Like It Hot.” Chris reenacts the hilarious final scene between Osgood Fielding III (played by the great, rubber-faced character actor Joe E. Brown) and Daphne, who lists multiple reasons why they can’t be together. As a sidebar, Jack tells the story of Jerry Lewis turning down the first offer to play Daphne, so whenever Wilder ran into Lewis, he greeted him with, “Hello schmuck.”

Jack talks about his film debut in 1954, “It Should Happen to You,” with Judy Holliday who, despite her airhead persona, “Was actually one of the brightest, sweetest women I’d ever met.”

As Chris, he reminisces about his dad, who called him “Hot Shot.” An accomplished musician, Jack taught his little “Hot Shot” how to play the piano.

He remembers seeing some of the biggest stars of that era partying in Jack’s Hollywood Hills home, among which were Marilyn Monroe, Gregory Peck, Shirley MacLaine, James Cagney, and Jimmy Stewart.

The booze flowed and Jack entertained his guests with his excellent jazz piano playing.  As far as booze, Jack developed a serious drinking problem, eventually seeking help to get it under control. His personal struggles with addiction doubtless lent personal authenticity to his deeply felt performance as an alcoholic in “Days of Wine and Roses.”

One of the show’s most poignant moments is when Jack opens up about his relationship with Walter Matthau, “Who was the closest thing to a brother I ever had, and the only guy who could really make me laugh.”

After Matthau died, Lemmon got a physical and was told by “Dr. Smuckelface” that he had only a few months to live.

So, for 80-heart warming minutes, Chris channels Jack. At times you could absolutely swear Jack was back, and it served as a reminder of how much his magical screen presence is missed. At the emotional closing Chris says, “Following greatness is not easy, but by honoring it, it lives on… Pops I love you.”

By mirrormmg January 27, 2015
in Life and Arts
Related Posts