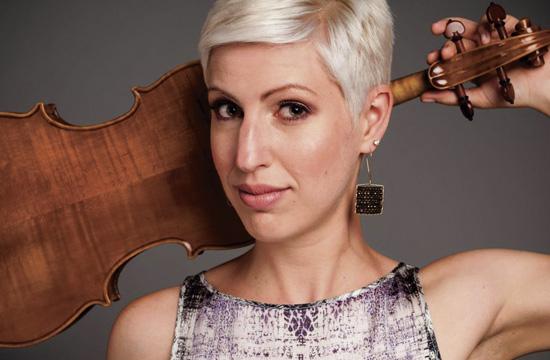 The New West Symphony’s principal violist Lauren Chipman will make her solo debut with the orchestra this weekend – including a performance in Santa Monica on Sunday – as part of the third Masterpiece Series concert of the Symphony’s 20th anniversary season.

Her debut will feature the world premiere of noted composer and pianist Mike Garson’s “Concerto for Viola, Jazz Trio & Orchestra” based on a theme by Paganini.

The Concerto was commissioned for her by the New West Symphony from Garson, who will also sit in as pianist in the jazz trio.

Chipman joined the viola section of the New West Symphony in the 2002/2003 season and was appointed principal viola during the 2011/2012 season.

As a crossover artist, Chipman is equally at home on a Hollywood sound stage, performing with The Section Quartet or writing for and performing with the indie band The Rentals.

She has appeared on the Grammys, American Music Awards, “American Idol,” “Dancing with the Stars,” “The Voice,” and “The Tonight Show.”

“William Tell,” Rossini’s final work for the stage, based on a play of the same name by Schiller. Although the opera itself has not achieved the same popularity as some of his earlier works, the Overture remains a popular favorite and one of his most often heard overtures.

Garson gained early and lasting fame as keyboardist with David Bowie, with whom he has recorded and toured internationally since 1971, but he has also enjoyed a brilliant multi-faceted career as a solo artist, composer, arranger, producer and teacher.

Garson, born in New York in 1945, started playing piano at age seven and went on to study composition with Leonard Eisner of The Juilliard School and earn degrees in music and education from Brooklyn College.

Hear & Now Live – a lively and informative, pre-concert discussion about the music on the program – begins at 7 pm on Friday and Saturday evenings and 3 pm on Sunday afternoon. The programs are free and open to ticket holders for the respective performances.

By mirrormmg January 23, 2015
in Life and Arts
Related Posts