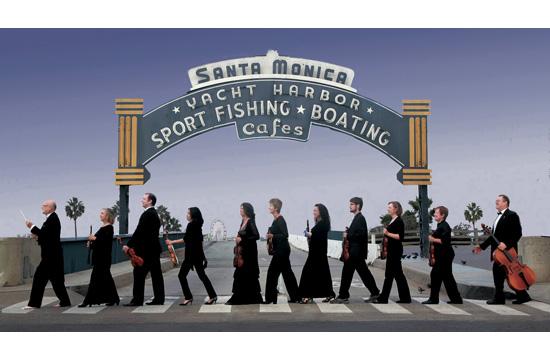 Orchestra Santa Monica celebrates its move to the Moss Theatre in Santa Monica’s New Roads School by presenting an all-Mozart concert this Sunday, Jan. 18 – a few days before the composer’s birthday.

The program features the most dramatic of his symphonies, “No. 40 in G Minor,” as well as the graceful “A Major Symphony No. 29.”

OSM’s Principal Oboist Catherine Del Russo will be featured in his “Oboe Concerto in C.”

An active player with orchestras in Southern California, Del Russo has performed around the world and has done studio work in Los Angeles playing in movies, television shows, and commercials.

Orchestra Santa Monica is thrilled to be performing in the acoustically superb and visually engaging Moss Theatre at Santa Monica’s New Roads School designed to offer the audience an intimate concert experience one rarely has with orchestra concerts. Its thrust stage provides audience members with an excellent visual connection to the players and to the music-making.

Orchestra Santa Monica is in its third season of offering the highest quality symphonic concerts of both traditional repertoire and new music. OSM is led by conductor and music director Allen Robert Gross who has received worldwide recognition for his imaginative and probing interpretations of standard and contemporary orchestral repertoires.

The Moss Theater at New Roads School is located at 3131 Olympic Blvd., Santa Monica. Plenty of free parking is available.

By mirrormmg January 16, 2015
in Life and Arts
Related Posts