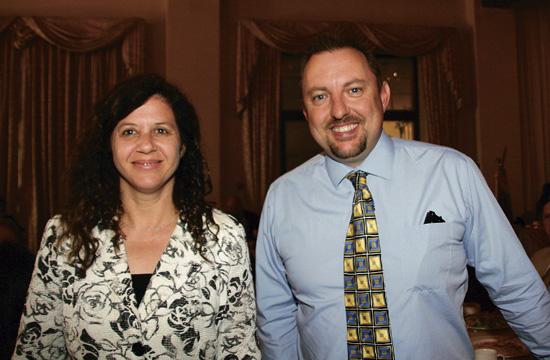 As the first Santa Monica Rotary gathering of the year, the Jan. 9 meeting at the Riviera Country Club kicked off with warm salutations as members greeted each other after a two-week holiday break.

After an inspiring invocation led by Fire Chief and Rotarian Scott Ferguson, which urged members to begin the new year with the mindset of “paying it forward,” the usual orders of business commenced, bringing the Rotarians back to a sense of weekly routine again.

A series of recognitions took place before the afternoon’s speakers took to the podium. The Riviera Club staff members, who make sure the dining portion of the meetings run smoothly, were recognized by the Rotarians as a token of gratitude.

“It’s going to go to a great cause,” McKeown explained. “We were thinking about something that will benefit our four concert bands, our two jazz bands, our Viking marching bands. I went to school in Santa Monica and I’m proud to come back and give back to the students and guide them in a program that has guided me.”

McKeown said the grant would go toward purchasing a brand new bass drum, an instrument that has not been replaced in 30 years and would be an aspect that would “most impact” the student group.

The grant was followed by the induction of Kathy Shepherd, an incoming new member, with Judy Neveau as her sponsor.

“[Shepherd] is very active in the community,” Neveau said of the new Rotarian. “She’s a tireless worker and she has lots of energy. We expect great things.”

Shepherd expressed her excitement toward joining the Rotary Club and said that she looked forward to a “long, successful membership.”

To conclude the meeting, the speaking segment of the meeting was delivered through Craft Talks, during which the club’s very own members take turns essentially sharing their autobiographies with their fellow Rotarians. Craft Talks speakers usually touch on their childhood, education, and career path.

With Dr. Caroline Schnakers and Ethan Brown in the spotlight this week, the Santa Monica Rotarians were enlightened by their respective journeys into the prestigious and competitive fields of science and law.

The usual lightheartedness of the weekly luncheons remained consistent as both Schnakers and Brown incorporated humor and wit into their individual Craft Talks, which proved to make for a pleasant afternoon as audience members remained very attentive throughout both autobiographies.

• Do you have a story idea or news tip? Contact Corina Mun by email at corina@smmirror.com.