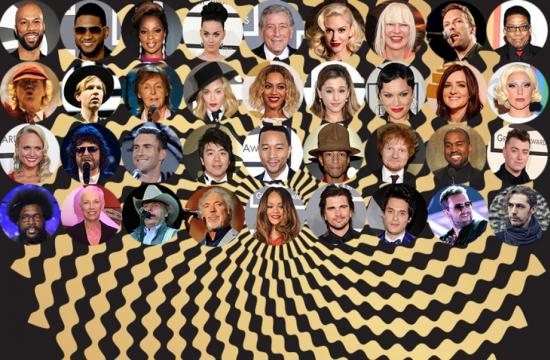 English singer-songwriter Sam Smith is poised for a big night at tonight’s 57th annual Grammy Awards, carrying nominations in the top three categories of song, record and album of the year, along with a nod for best new artist.

Smith has a total of six nominations, sharing the lead with Beyonce and Pharrell Williams.

Beyonce is up for album of the year for her self-titled release, as is Williams for “Girl.” Beck is nominated for “Morning Phase,” while Ed Sheeran rounds out the category for “X.”

Smith’s “Stay With Me” will battle for record of the year with Iggy Azalea and Charli XCX’s “Fancy,” Sia’s “Chandelier,” Taylor Swift’s “Shake It Off” and Meghan Trainor’s “All About That Bass.”

With the exception of “Fancy,” the record of the year hopefuls are all nominated for song of the year. Replacing “Fancy” in the category is Hozier’s “Take Me to Church.”

Swift’s blockbuster album “1989” was ineligible for the album of the year category because of its release date, but the “Shake It Off” single was released earlier, landing it in the song and record of the year categories. The 57th annual Grammy Awards cover work released between Oct. 1, 2013, and Sept. 30.

Smith’s other nominations are for best pop vocal album for his “In The Lonely Hour” and best pop solo performance for “Stay With Me.”

Azalea is also nominated for best pop duo/group performance for teaming up with Charli XCX on “Fancy” and best rap album for “The New Classic.”

Nominees for best country album are “Riser” by Dierks Bentley, “The Outsiders” by Eric Church, “12 Stories” by Brandy Clark, “Platinum” by Miranda Lambert and “The Way I’m Livin”‘ by Lee Ann Womack.

The bulk of the Grammy Awards will be presented during a pre-telecast ceremony at the Nokia Theatre.

Here is a complete list of nominees for the 57th annual Grammy Awards, which will be presented today at Staples Center:

Record Of The Year

— “Shake It Off,” Taylor Swift

— “All About That Bass,” Meghan Trainor

Album Of The Year

Song Of The Year

— “Shake It Off,” Taylor Swift

— “Say Something,” A Great Big World With Christina Aguilera

— “My Everything,” Ariana Grande

— “I Got U,” Duke Dumont Featuring Jax Jones

— “Do I Wanna Know?” Arctic Monkeys

— “The Negative One,” Slipknot

— “Give The People What They Want,” Sharon Jones & The Dap-Kings

— “Because The Internet,” Childish Gambino

— “Give Me Back My Hometown,” Eric Church

— “Something In The Water,” Carrie Underwood

— “Gentle On My Mind,” The Band Perry

— “Give Me Back My Hometown,” Eric Church & Luke Laird, songwriters (Eric Church)

— “The Eye Of The Hurricane,” Kenny Barron, soloist

— “I Wanna Be Evil: With Love to Eartha Kitt,” Rene Marie

— “All Rise: A Joyful Elegy For Fats Waller,” Jason Moran

— “The Offense Of The Drum,” Arturo O’Farrill & The Afro Latin Jazz Orchestra

— “Love On The Radio,” The Walls Group; Kirk Franklin, songwriter

— “Welcome To The New,” MercyMe

— “Shine For All The People,” Mike Farris

— “A Cappella,” The Martins

— “His Way Of Loving Me,” Tim Menzies

— “A Feather’s Not A Bird,” Rosanne Cash

— “The Old Me Better,” Keb’ Mo’ Featuring The California Feetwarmers

— “The River & The Thread,” Rosanne Cash

— “Only Me,” Rhonda Vincent

— “Back On The Controls,” Lee ‘Scratch’ Perry

— “Amid The Noise And Haste,” Soja

— “Traces Of You,” Anoushka Shankar

— “Appetite For Construction,” The Pop Ups

— “I Am Malala: How One Girl Stood Up For Education And Changed The World (Malala Yousafzai),” Neela Vaswani

— “Just Say Hi!,” Brady Rymer And The Little Band That Could

— “Through The Woods,” The Okee Dokee Brothers

— “A Call To Action,” Jimmy Carter

— “We Will Survive: True Stories Of Encouragement, Inspiration, And The Power Of Song,” Gloria Gaynor

— “We Are Miracles,” Sarah Silverman

— “Get On Up: The James Brown Story,” Peter Afterman & Harry Weinger, compilation producers

— “I See Fire,” Ed Sheeran, songwriter (Ed Sheeran) Track from: The Hobbit: The Desolation Of Smaug

Best Arrangement, Instrumental or A Cappella

— “The Other Side Of Bakersfield: 1950s & 60s Boppers And Rockers From ‘Nashville West’,” Scott B. Bomar, album notes writer (Various Artists)

Producer Of The Year, Non-Classical

Producer Of The Year, Classical

— “All The Things You Are,” Leon Fleisher

— “Metallica Through The Never,” Metallica

— “The Truth About Love Tour: Live From Melbourne,” Pink

By mirrormmg February 8, 2015
in Life and Arts
Related Posts