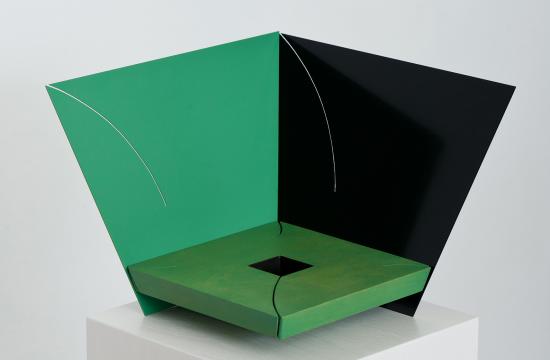 The show, which is open to the public, opened Feb. 17 and runs through Saturday, March 28.

Shire, Paweski, and Harkawik will also hold a free panel discussion in the gallery on “Interpreting the Value(s) of Art & Design” at 2 pm Saturday, March 14.

“Peter Shire and I conceived of the exhibit through our friendship and mutual interest in design objects,” said Paweski. “The show presents a group of works that point to a future where function is blurred and things that seem to perform one task, actually do another.”

“A cross between a buddy movie and a visual portal into an extremely positive vision/version of the future,” is how Shire describes the exhibit. “This vision is given form through the objects of life,” he said. “Life is such an un-definable quality that these things that reflect around us must be very rich. The fondamenta, the foundation embankment, the pediment, the quay, the departure point… which if you are coming from the opposite direction… is the point of arrival.”

Paweski, a Detroit native who grew up in Phoenix, is a sculptor and designer who now works in Los Angeles. His works – which have been exhibited in Los Angeles, New York, and London – are furniture-inspired pieces influenced by two-dimensional drawing and his background as a carpenter, cabinetmaker, and welder.

Shire is an award-winning L.A. artist whose colorful sculptures, furniture, and ceramics mix elements of art, architecture, and pop culture. His imaginative creations have been shown in the United States, Italy, France, Japan, and Poland, and his public sculptures include the colorful North Hollywood Gateway.

Connors is a New York artist whose abstract works draw from the history of painting, as well as the fields of language, music, and design. He has exhibited across the United States and Europe, and was awarded a 2012 John Simon Guggenheim Memorial Foundation Fellowship.

Harkawik is a L.A. sculptor and photographer who uses architecture and industrial design as inspiration. His works, which explore themes of visual perception and intersubjective communication, have been exhibited in New York, Los Angeles, and Paris, where he was awarded an Artist Residency at Cité Internationale Universitaire des Paris in 2012.

Gallery hours are noon to 5 pm Tuesday through Friday and 11 am to 4 pm Saturday. The gallery will be closed March 6 and 19.

By mirrormmg February 24, 2015
in Life and Arts
Related Posts