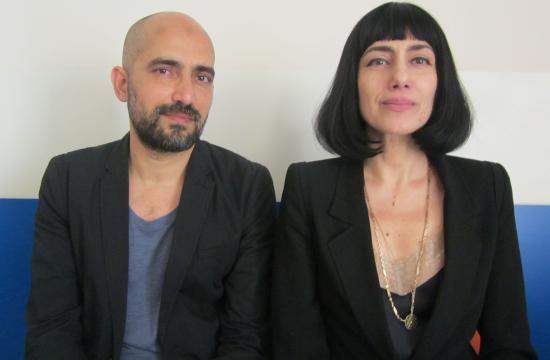 “GETT: The Trial of Viviane Amsalem” is an award-winning film and Israel’s submission for the Academy Award for Best Foreign Language Film. This is the third film in a trilogy, which began more than a decade ago.

Written and directed by the Israeli brother-sister team of Shlomi Elkabetz and Ronit Elkabetz, Miss Elkabetz, an award-winning actress, has starred as the lead character, Viviane Amsalem, beginning with the first film, “To Take a Wife,” followed by “Seven Days,” and likewise stars in their latest film.

This is a provocative film which explores the exhaustive attempts by the female character to secure a divorce in Israel, which is only possible to attain through the male dominated rabbinical court system, and only if the husband agrees to the divorce.

There is no such thing as a civil marriage or civil divorce and only rabbis can dissolve a marriage through a “gett,” a system that has been in place for thousands of years and is under the exclusive control of Orthodox rabbis.

According to the filmmakers, the film has given impetus to a movement to change this archaic, sexist law.

Besides Miss Elkabetz, other members of the cast include: Simon Abkarian as her husband Elisha, Menashe Noy as her lawyer Carmel Ben Tovim, Sasson Gabai, as Elisha’s brother Rabbi Shimon, and Eli Gornstein as Head Rabbi Salmion.

Ronit and Shlomi recently sat down with your reporter for an exclusive interview, and the following has been edited for content and continuity.

What motivated you to tell this story?

Ronit: So many women in Israel go through this process – so many.

Shlomi: Right now there are about 45,000 open cases. The rabbinical courts govern marriage and divorce and that applies to everyone – secular and non-secular. There are no other options in Israel, so it’s very complicated.

How long do you have to wait to go to court and plead your case?

Ronit: If everyone is in agreement, it can be two days but if you refuse like Elisha, the character of the husband in our film, you could wait years and years or all your life.

Shlomi: The radical cases are twenty years or more.

How did the project start and did you base your character on someone you knew personally?

Ronit: Actually, one day I called my brother. He lives in New York. I was in Paris. I told him I have something that I want to talk with you about. I want to do something with you. We knew that one day we would work together again, but each of us went our separate ways after the last film. The character of Viviane is based, in a way, on the story of my mother. I didn’t know what I wanted to do with it, but I wanted so much to do something with this question – of a woman who just doesn’t feel good in her place and wants to leave, but can’t find a way to leave. So, I went to New York and Shlomi and I just started to speak – just to speak – and we found that after three weeks we wrote a script.

How was it writing together and were there any conflicts during the shoot?

Shlomi: Not at all, actually – not even one. We say that we vomited the story, meaning that everything we had in our minds was expressed immediately on the page, and then in the film.

Did the script go through any changes during the shoot?

Shlomi: We did not change one word of the original script that we wrote in New York.

Did any sibling stuff come up during the writing or directing processes?

Ronit: It was an extraordinary for us. It was like 20 hours a day. We couldn’t stop speaking and dreaming and telling the story. We asked a lot of questions about what we wanted. What do we want to tell? Through the days, we understood what the subject was.

Shlomi: It was like an epiphany for us in many ways. First, the new encounter: Two adults coming to do something together. Coping with our relationship, with our past, with our future, with our dreams, and the dreams of this woman.

Ronit: Suddenly, as we were writing, we saw all the women in our family differently. We started to look at them and would say, what about her and her and her. How is she living? How is the relationship between her and her husband? We discovered that this situation is all over. It was like a dramatic discovery.

Shlomi: It’s like you know your family. You know your neighborhood. You look at them and you say okay, this is my mother, that’s my aunt, she gives me food; she cleans my house; she brought me a present. All of a sudden you see the women in your life differently. She’s not just your mother. She’s not just your aunt. She’s not just your grandmother. You see them as people, and I think it’s an amazing discovery in anyone’s personal life – to all of sudden to really see the people who are surrounding you.

How did you see the character of Viviane?

Ronit: She’s a progressive woman. We grew with her over the last two films. We tried to be attentive to her needs. It was really amazing for us to spend this past year with her character. We not only learned a lot about her, but about the situation with women in Israel.

Did you interview women who had actually gone through this judicial process?

Shlomi: We didn’t need to. We knew this situation upside down. So we took the story and poured it into the Israeli law system to see how the Orthodox court copes with this couple. How can the State help them solve their problem?

Did you get any resistance from the Orthodox community?

Shlomi: Listen, I don’t have to hide when I’m doing a film about anyone. The Orthodox in the Israeli government is not like the KGB. We do want we want and stand with the consequences.

Have there been consequences for you?

Shlomi: There have been extremely positive consequences.

You mentioned in another interview that a new law regarding divorce might be enacted. Is that a reality and will the Orthodox community allow that to happen?

Ronit: That’s a big question and maybe that’s going to be a reality.

Shlomi: For the first time in centuries, the head rabbi of Israel was repeatedly asked if he had seen “GETT” in the cinema. Because the film became a political and cultural event, he had to cope with it. He informed the press that he was going to show the film at his annual convention of rabbinical judges. This is an enormous achievement. Nobody would believe that something like this could happen.

Will you be at the screening?

Shlomi: We’re not allowed, but we can talk to them later. This is a huge step and since this is happening, I don’t think it will be easy to go back to the present way, as there must be a progression. Up until now, the rabbinical courts have not changed because of political reasons.

When you screened the film for young people, what was their reaction?

Ronit: The reaction I had from young people was that they were going to think about this subject. Some of them said, ‘I don’t know I’m going to get married.’

How did you go about casting the rabbis?

Shlomi: We worked with a casting director. We don’t audition actors, but just about every actor in Israel who knows our work says they don’t have to read the script and accepts the role. But, in this specific film, all the actors that got the role of the one of the rabbis said this was an amazing story, but was an “ungrateful” role and couldn’t see the drama on just reading the script.

So if you don’t hold auditions and don’t have an open casting calls, what is your process of selection?

Ronit: When we are writing a script, we have an actor in mind. We imagine who would be right for the part. Also, “GETT” is the third film in a trilogy about Viviane Amsalem and some of the actors worked were in the first two films. In this film, we had six or seven actors who were new. So, we don’t do auditions. We offer the parts.

You mentioned earlier that you didn’t change a line in the script. Did an actor ever say that a particular line didn’t feel right and how did you handle that?

Shlomi: Occasionally an actor would ask if a line could be made shorter, but really that didn’t happen very often.

Ronit: They loved the script so much that there were virtually no problems.

How have your lives changed since this film?

Shlomi: When someone comes to you and says that you have changed a perspective in his life, you feel that the change is not only happening outside, but is also happening within yourself as well.

Ronit: Today we can say things that before we couldn’t say and we can say it simply and clearly. We deserve that.

It is my opinion that the role of the artist is to illuminate the human condition and you certainly have achieved that with this film. Congratulations.

Ronit & Shlomi: Thank you very much.

By mirrormmg February 8, 2015
in Life and Arts
Related Posts