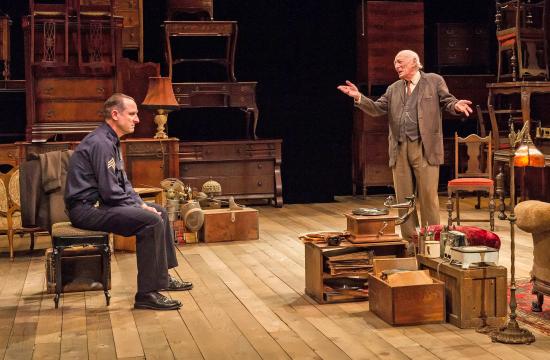 It’s almost sacrilegious to even think about criticizing Arthur Miller – one of America’s most preeminent, most lauded playwrights. His Death of a Salesman, for which he won the Pulitzer Prize, stands as one of the greatest plays ever written as it dissected the slow demise of a once very successful salesman.

It served as a compelling metaphor of the disposal of the old when they cease to produce. Equally powerful, and still relevant, are his other three seminal plays – All My Sons, The Crucible, and A View From the Bridge, all of which are rife with unique story lines and memorable, distinctive characters.   Some of his other works include, The Misfits, After the Fall, and Incident at Vichy.

The Price, a revival production on stage at the Mark Taper Forum, is a much thinner piece of work, but one might say that the “disposals” theme inherent in this play are the disposals of obsolete family property as well as the disposal of issues around sibling rivalry as unraveled throughout this two-act play.

Victor had a promising career as a scientist but became a policeman because he didn’t have the money to go to school. He also decided to become a cop so he would be able to look after his aging father. This sacrifice comes under scrutiny by Walter, a very rich, successful surgeon, debunking the perceived reason for Victor’s sacrificing decision. The brothers have not spoken in over a decade with their only connection being the five dollars a week Walter had been sending as his contribution towards the care of their father, who had lost all his money in the 1929 stock market crash.

It seems that following the crash, their uncle took over their brownstone and the family was moved upstairs to the attic, where the brothers spent their growing up years. This attic, well designed by Matt Saunders, is crammed to the rafters with a huge variety of all kinds of vintage furniture – tables, chairs, couches, wardrobes, end tables, an antique radio, and a harp. This is setting where the action takes place.

Victor is the first character to appear on stage and wanders around the attic bulging with furniture, touching pieces here and there and playing a record, which brings back some pleasant childhood memories. The furniture must be sold as the brownstone is going to be demolished. He has communicated this to his brother and asked him to come help in the sale of the furniture.

Victor is married to Esther, played by Kate Burton. She is dissatisfied with the life she has had with her husband and wants more. She is apparently a practicing alcoholic who periodically leaves to get a drink. Perhaps she buries her resentments by drinking, but that doesn’t stop her in the opening scene from the barrage of harsh words directed at her husband. She is adamant that the proceeds of the sale belongs to Victor and should not be shared with Walter.  So, not only does Walter have to deal with his wife, but has to orchestrate the huge job of disposing of the furniture, as well as contemplating possibly retiring from the force after serving for 28 years. He’s stuck and doesn’t know what to do. Much of Act I is exposition of past decisions and behavior.

Victor has contacted Gregory Solomon, an antiques furniture estimator, wonderfully played by Alan Mandell who brings high energy to his performance. He’s an old codger who is use to playing cat-and-mouse when it comes to finally giving a quote. A very elderly Solomon is apparently retired and wonders how Victor got his phone number saying, “You must have used a very old phone book.” Throughout the first act, Victor keeps pressing the elusive Solomon for a quote asking how long it would take to sell everything to which he replies, “It could be a year-and-a-half and for me that’s a big bet.”

In the final scene in Act 1, Walter arrives well dressed in a camel’s hair coat.  Act II picks up at that entrance. There is much sibling banter back and forth with Victor rehashing his old wounds. Accusations abound. However, Walter is not the monster we had been expecting to meet. He confesses that he is divorced and has had a nervous breakdown. However, Victor holds tightly on to his resentments, including Walter’s refusing to lend him $500 so he could go school. There is more exposition of past hurts with an interesting revelation about their dad’s actual financial worth. For the most part, these exchanges don’t actually drive the play forward and at times it feels like the material is just marching in place.

In the meantime, Solomon is in and out of Act II, again bringing much–needed energy to the scenes. On one occasion, he returns from the unseen bedroom to fetch a hard-boiled egg from his brief case, ceremoniously peeling the shell over one of the antique tables. The frail estimator’s interruptions of the hostilities flying back and forth between the brothers and Esther, thankfully brings comic relief.

Under the direction of Garry Hynes, one cannot find any criticism of the performances, as the cast was excellent. It appears that the same criticism exists today that existed when the play premiered in 1968 and that is the overall thinness of the story as well as the characters. Perhaps by eliminating the excess “fat,” this play would have been better served as a tight, lean, one-act play.

But, hey, it’s Arthur Miller so even with its weaknesses, it still Arthur Miller who in The Price does have some observations on family dynamics, especially as it pertains to personal disappointments and blaming others for the actions we take in our lives.

As is the norm for Center Theatre Group productions, the technical team was excellent with a complimentary lighting design by James F. Ingalls as well as an interesting sound design by Cricket S. Myers.

By mirrormmg March 10, 2015
in Life and Arts
Related Posts