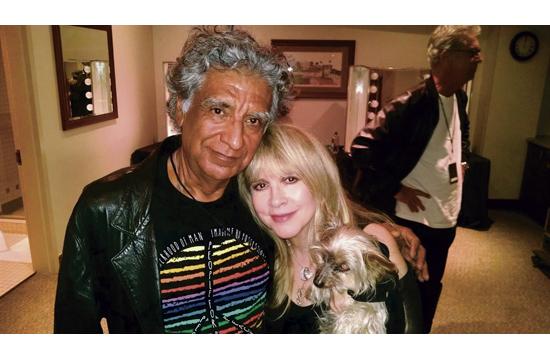 It is Fleetwood Mac’s 40th anniversary together as a band. How fitting it is that they are touring throughout North America and Europe for this occasion. Christine McVie is back with the band.

But long before Fleetwood Mac, Lindsey Buckingham and Stevie Nicks were in their first band. And the young man in High School back in 1967 who founded the band Fritz is Bob Aguirre. He recruited former band mate Javier Pacheco (they had played in a couple of bands previously) along with fellow senior classmates Lindsey, Jody Moreing, and her cousin Cal Roper to form a band to play the Senior Talent Assembly.

By 1968, Cal left for college, and was replaced by Brian Kane, and Jody quit to join another band. After a few failed attempts with other female vocalists, Stevie was asked to join. Now the band had all the pieces in place. Brian Kane (now on lead guitar, vocals), Javier Pacheco (keyboards, vocals), Bob Aguirre (drums), Lindsey Buckingham (now on bass, vocals), and Stevie Nicks (lead vocals, percussion)

Today, I have the honor of speaking with Bob Aguirre, whom has watched the musical journey and legacy for Lindsey and Stevie.

Hello Bob, first I want to thank you for this interview. You have quite a legacy as founder and drummer of Fritz. You also were with The Curtis Brothers, Dr. Hook, Buckingham and Nicks, and The Trailer Park Troubadours.

You were the one who asked Stevie Nicks to join Fritz in 1968?

Yes, I made the call. You could say I am responsible for Lindsey and Stevie joining their first band. At least that’s what I say.

Did Fritz start playing small gigs and work their way up?

Our first paying job was for our high school’s freshman dance. Lindsey’s brother, Greg, who was attending Stanford, showed up with a couple of his frat brothers and asked us to play at their next party. It was there we met our future manager, David Forest.

He started booking us at Stanford frat parties and events and as we got better and he branched out, first starting his own agency in San Jose, where we started the playing the high school circuit, then to working for Bill Graham, and finally at CMA in Los Angeles, he took us with him, and we started playing better and bigger venues.

What was it like to be the opening act for Janis Joplin and Jimi Hendrix?

Our first big gig we opened for Janis and Big Brother at the Santa Clara County Fairgrounds. I had a rubber chicken hanging from my cymbal stand; Janis saw it at sound check and made a comment. She was nice enough and saved me any further embarrassment. I realized then and there, this was a whole new ball game. The chicken disappeared before the next show. We also played shows with Santana, Steve Miller Band, Moody Blues, Ike & Tina Turner, Chicago, War, Chuck Berry, The Youngbloods, even a West Coast tour opening for Poco and Leon Russell. We never got to meet Jimi.

I read that you toured with Dr. Hook. How long did you tour with that band?

Actually, I started as a roadie. We would set up the equipment and have everything ready on the stage. Not like today, every band member has their own technicians. What happened was the drummer quit between connecting flights to a show. The band says, “You’re playing tonight.” It was scary, yet exciting.

You joined Buckingham/Nicks band in Los Angeles. How was it to be back with them?

Lindsey had asked me to join the band a couple of different times before and I didn’t think he would ask again. So I left San Francisco and moved in with Stevie, Lindsey and Richard Dashut. It was tough, we were all pretty poor. But we were young, living in LA and in a band. When Fleetwood Mac called and asked Lindsey to join, he wasn’t that keen on the idea. Plus he wasn’t going to do it without Stevie. He asked me what I thought about them joining. I told him to give it a year, if it didn’t work out it would look good on their resume. Now they are in The Rock ‘n Roll Hall of Fame with Fleetwood Mac. I’m pretty sure that looks good on the resume!

Bob, were there any songs that Stevie or Lindsey wrote while you were touring with them, that is on a Fleetwood Mac album?

Yes, in a matter of fact, we were playing in Alabama, and Gary Hodges and I were both playing the drums. And Stevie was telling the story about Rhiannon, and you can hear her say “not too fast.” We needed an up tempo song, so it was a bit fast. In fact, you can check the web or youtube and hear her telling us not too fast.

Bob, you told me earlier about the song Crystal which Stevie and Lindsey wrote before Fleetwood Mac? Would you mind telling the readers the story?

Sure, well Lindsey, originally sang Crystal and Stevie sang background vocals. I think it was 1998, she sang it and it is on the Practical Magic Movie. Well, I was floored by the way she sang it. I called Stevie and said, “Wow you sang Crystal with so much heart and soul” she giggled and said “Thank You Bob.” And of course Lindsey sang it great too. But, when I heard Stevie’s version. “Wow.”

Bob, one last question. Are you still friends with Lindsey and Stevie?

Most definitely, I talk with and see more of Lindsey. When I do see Stevie, like with any long-time friend, it’s like no time has passed. Stevie and Lindsey are very talented and great people.