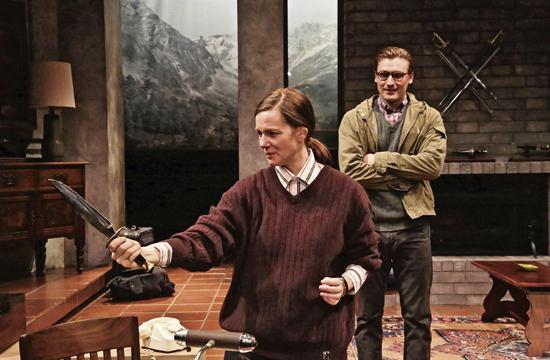 Laura Linney is no stranger to the stage and has racked up multiple impressive Broadway credits including “Time Stands Still,” “Sight Unseen,” “The Crucible,” “Six Degrees of Separation,” “Uncle Vanya,” “Les Liaisons Dangereuses,” and “The Seagull.” Equally at home on the big screen, she had key roles in “You Can Count on Me,” “Kinsey,” “The Savages,” “Hyde Park on Hudson,” “The Squid and the Whale,” “Love Actually,” and “The Truman Show,” just to name but a few.

Linney has also graced television with her extraordinary talent appearing in such shows as “The Big C,” for which she won several awards, including an Emmy, the HBO mini-series “John Adams,” and played the girlfriend in the last six episodes of “Frasier.” At different points in her career, she has been nominated for and/or won a Tony, Academy Award, Emmy, and a Golden Globe, as well as receiving recognition from both BAFTA and SAG.

I begin with her awesome list of credits as to expect anything less than a powerful performance from her is just not in the realm of realty, and Linney does not disappoint. Her performance as Patricia Highsmith, the best-selling author of macabre crime novels, is simply edge-of your seat riveting.

Under the crack direction of Mark Brokaw, Linney has crawled deep inside her character’s skin delivering a performance embodying all the complexities of her complicated character.

Joanna Murray-Smith’s play is about this prolific novelist, best known for the creation of the character of Mr. Ripley, as in “The Talented Mr. Ripley,” which starred Matt Damon, as well as the iconic Hitchcock thriller “Strangers on a Train,” featuring Farley Granger and Robert Walker.

On entering The Audrey Skirball Kenis Theater, one is immediately immersed in a Swiss setting beautifully designed by set designer Anthony T. Fanning. Projections of the towering Alps encircle the entire theatre serving has an authentic backdrop to Miss Highsmith’s cozy home in Tegna, Locarno, Switzerland, with Lap Chi Chu’s lighting design beautifully reflecting the changing moods throughout the play.

In real life, Highsmith was known as a nasty drunk who hated everyone and everything – from blacks to Jews to the entire American social, legal and business systems. Linney captures all those prejudices and becomes at one with them. In the play, a very “butch” Highsmith still writes on a portable typewriter, eschewing anything to do with modern gadgetry or technology such as the Internet, emails, and God forbid texting. The word “f” usually punctuates the beginning or ending of each sentence. The only things she trusts are her cats and snails, which she cultivates in her back yard.

At rise, Highsmith is typing away and hears someone enter. With a cigarette dangling out of her mouth, and without looking back, she spits out “you’re late” and immediately tells Edward, the other character in this two-hander, to leave. Edward, brilliantly played by Seth Numrich, is an emissary from Highsmith’s publisher who is trying to get her to agree to sign a contract for one more Mr. Ripley novel. The last representative woke up with a knife at his throat and fled back to New York sans a signed contract. Numrich’s interpretation of his character is fascinating as we watch his character go through multiple behavior transitions. Ultimately, he serves as a wonderful foil in what will become a perilous game of cat-and-mouse.

They’re initial encounter is anything but cordial, with Highsmith telling him to get the “f” out every few minutes. She informs him that she has no intentions of signing any contract. But, still holding his backpack, Edward refuses to leave. He awkwardly tries to engage her in conversation, asking her why she’s living in Switzerland. The beyond acerbic Highsmith gives him a litany of reasons as to why she’s likes living in Switzerland. “When you call a cab, they come.” She makes no bones about telling him that she’s insulted that the publisher sent such a young emissary to do such an important job. It turns out he was the only one in the company willing to come to Switzerland to meet the dreaded Highsmith.

This queen of nastiness continues to verbally brutalize Edward, chewing up her words and spitting them out in rapid-fire machine-gun timing. Despite the verbal assaults, Edward stubbornly holds fast to his mission and ultimately refuses to leave without a signed contract. Highsmith then seizes on the subject of his parents who she correctly guesses are dead. When he confesses that they are, indeed dead, she wants to hear every gory detail. Edward tells her they were killed in a car accident and she relishes hearing all the gory details. “I love icy roads,” gleefully adding, “They’re lethal.”

Continuing her barrage of insults she says, “So far, that catastrophe is the only interesting thing about you.” She grills him about his childhood, overjoyed at any negative aspect of his growing up and in keeping with her sardonic self declares, “We’re all doomed.”

Despite her anger, Highsmith finally grants him permission to stay and wants him to empty the contents of his backpack, which should contain some items she requested. Edward ceremoniously removes the contents piece by piece which includes six cans of Campbell Soup, Skippy Peanut Butter, which infuriates her, a half dozen composition note books, and white shirts. He also brought her the knife she requested for her arsenal of weapons, which include a Bowie knife, swords, and a double barrel Derringer pistol. As the encounter continues, Highsmith softens just a tad, but never loses that nasty, cruel tone and every so often tells him again to get the “f” out.

Feeling just a wee bit more daring, Edward comments that she sees the world through the perverse eyes of Tom Ripley. So, just to tease him, she begins to spin a new tale featuring her sadistic Ripley character. Just when Edward is completely fascinated by her ramblings, she challenges him to come up with a unique way to kill the old lady in her evolving story. She added that if his method of murder pleases her, she would sign the contract. He accepts the challenge and this is as far as I’ll go, for what happens next is pure theatrical drama and will have you leaving the theatre feeling the way I did, which was, “That was a wow!”

Finally, here’s the good new, bad news. Miss Linney’s star power resulted in the entire run being sold out before opening night. However, if you want to see this production, keep calling the box office to see if there are any cancellations. It’s worth the effort.