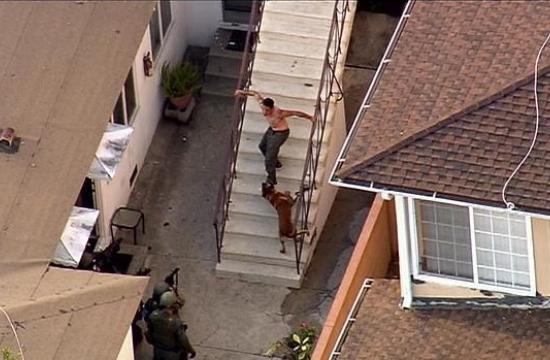 A man who barricaded himself inside a Santa Monica apartment for nearly five hours before he was subdued by a sheriff’s dog pleaded not guilty on Wednesday to a murder charge stemming from a fatal stabbing less than two weeks earlier in the unincorporated Westmont area near South Los Angeles.

David Carrillo, 28, is charged in the death of Wesley Morejon, who was attacked Feb. 10 with a folding knife outside a fast-food restaurant in the 8900 block of Vermont Avenue, according to the Los Angeles County District Attorney’s Office.

The murder count includes an allegation that Carrillo used a knife during the crime.

Carrillo was arrested about 5 p.m. Feb. 21 following a standoff at an apartment in the Ocean Park area of Santa Monica.

“The situation concluded after tear gas was deployed into the location,” Deputy Grace Medrano of the Los Angeles County Sheriff’s Department said shortly after the standoff ended. “As the suspect began to exit the location, he attempted to return back inside when the Special Enforcement Bureau K-9 was deployed. The K-9 was able to control and bring the suspect to awaiting personnel with no further incident.”

Carrillo faces up to life in state prison if convicted as charged, according to the District Attorney’s Office.