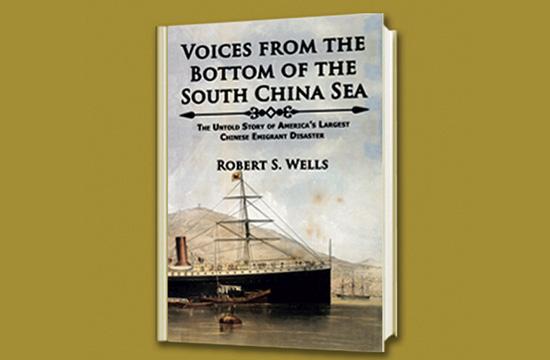 Santa Monica native and author Robert S. Wells delves into the story behind the economic relationship between the U.S. and China in his new book, “Voices from the Bottom of the South China Sea: The Untold Story of America’s Largest Chinese Emigrant Disaster.”

After developing an interest strong enough to invest four years of extensive research and writing, Wells sought out to elaborate on an untold story of international relations.

With a 30-year career in the Navy during which he served on eight ships, Wells’ professional backdrop motivated his initial curiosity about the subject matter a decade ago.

“It all started at lunch with members of the Chinese Embassy in Washington in 2005,” Wells explained. “We were beginning preparations for the Spring 2006 State Visit of Chinese President Hu Jintao. During the conversation about the U.S.-China economic relationship, we all wondered when the relationship started.”

As a California native, Wells initially thought of the Gold Rush and became drawn to steamship service in San Francisco in the 19th century.

After some basic research, the S.S. Japan in particular caught his eye due to the fact that it was lost at sea.

“There are wonderful research facilities in Washington,” Wells said. “I discovered the inquiry report of the loss of the S.S. Japan and I knew then that I needed to write a book and tell the story.”

Upon further study, Wells started to foster a personal connection with the Captain of the S.S. Japan, Edward Warsaw, as well as the numerous lives of Chinese emigrants who braved the ocean voyage.

“I’m a ship captain that’s sailed the South China Sea,” Wells said. “The more I read about Warsaw and the challenges of taking an all-wooden sidewheel steamer across the Pacific Ocean with hundreds of Chinese emigrants and passengers, I was hooked.”

According to Wells, the U.S. relied on sidewheel steamers – which were “riverboat designs from the 1850s for trade” – largely for mail transportation and trade development with China and Japan.

“[The voyages] were dangerous, risky, and monotonous,” Wells said. “Once I finally found the primary documents on the S.S. Japan tragedy, it revealed the courage, tragedy, and the lives of Captain Warsaw, his passengers, and the richly important story of the Chinese emigrants and what they endured and how hard they worked.”

As for the research process, Wells described the journey as “placing pieces into a mosaic” that revealed a bigger picture: his focus shifted as he sifted through various sources.

“At first it was all about the ship, then the Captain, and finally the larger story of the Chinese experience in Gold Mountain in California,” Wells explained. “After three years and visits to four different scholarly institutions, I had the first draft of the manuscript, which I edited and submitted to the Library of Congress.”

Although it took time and patience to receive a copyright, garner appropriate illustrations, and become approved by a publisher, “Voices” was published in October 2014.

Through the book, Wells said that he wanted “to provide the readers new history about the U.S. and China, especially the Guangdong Province where almost 100 percent of 19th century Chinese emigration to California and the U.S. originated.”

Wells is currently a consultant in the greater Washington, D.C. area as president and CEO of his company, Bob Wells Associates, where he helps clients with strategic planning and marketing management.

Wells is presently writing a screenplay based on one of the stories within “Voices.”

By mirrormmg April 3, 2015
in Life and Arts
Related Posts