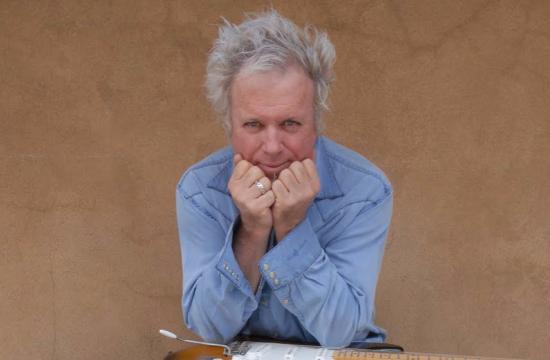 When musician Phil Brown decided to take a break from the grueling tour circuit, he became a staff writer from 1983 to 1988 working for Warner Brothers and A&M Music.

His work has been cut by many recording artists such as Cher, Kix, Pat Benatar, Willie D & Tower of Power, Doro Pesch, KBC, Ace Freely, Paul Barrere, Fiona, Steve Perry, and Kim Carnes. He was also the front man for Little Feat (after Lowell George’s passing) and is still at it today.

Brown recorded a CD of re-imagined Hendrix songs called The Jimi Project. With his amazing vocals and exceptional guitar it is hard to argue with his talents.

Whether he is playing electric or acoustic guitars he belongs in the same club such as Hendrix, Beck, Clapton, Pass and McLaughlin – players whose sound resides as much in their touch as in their soul.

Hi Phil, I am so excited to speak with you today. And I just want to mention, how much I love your music.

Now you and I have been speaking to each other quite often. Tell me how and when did you start this amazing musical journey? And whom were your musical influences?

My family was musical…my mother played piano and sang. My father taught me to harmonize. At six years old I started on a banjo and then at seven years old the violin. And finally when I was eight years old the acoustic guitar. Growing up my parents loved Broadway musicals. It was really all about entertainment. I loved Walt Disney. The songs were incredible. I also played guitar with the Glee Club. I got hooked on performing at such a young age and I am still hooked today! Were there any rock and roll singers or bands that influenced you? Yes, when I saw Elvis on “The Ed Sullivan Show” I was floored. But, when I heard The Beatles, it was over! I would run home to listen to the new Beatles songs on the radio. All of my friends would talk about the Beatles new song the next day at school.

When you played with Little Feat, how long were you with the group and why did you leave?

I joined after Lowell passed away. We did half of their songs and half of mine. I was with them for about five months. I started smoking pot when I was 15…it lead me deeper into addiction. Back then there weren’t any rehabilitation facilities like there are today. I joined a 12-step program. It took me a minute to really become sober. It wasn’t easy but that 12-step program saved my life. Now I heard you did an album called Smack? Yes, in 1968, I was on a summer scholarship to Kansas University. Picture four young clueless kids who made a record of cover songs Cream/Hendrix/Buffalo Springfield and the Kinks. This album is still sought after today by the world’s most exotic collectors. If you could find an original copy they sell for almost $50,000. A Belgium record company sells the album today and it is one of their biggest sellers.

What makes you different from other musicians?

Well, I am classically trained. The music writes me. Once I start it just takes over and the lyrics and music just flows out of me. I don’t use a pick. There is a special sound you get with your fingers. The music business is a tough and crazy business. How do you get through the stress and unpredictability of it? I mean, for your body, mind, and soul? I wrote some big songs and I didn’t know the business. Like many artists I was taken advantage of. It estimated that I am owed millions. So, I can’t really speak about this royalty situation too much…my new attorneys are handling it. How do I get through the stress of the business? Well, you need to be happy, and keep your body well. And I do meditate, and I make time to be silent. You need to be conscious of yourself. You really need to slow down and watch and listen.

Now, you have signed with a new record label. What is the labels name?

The record label is “Apaches from Paris” the same name as my group. I am working on a new recording as we speak! You have recorded three CDs Cruel Inventions, The Jimi Project, and Imagine This. Are you recording anything new? And do you still do stage tours? I am going to London in a few months. I will be performing and recording over there on a duet with someone which I cannot mention. I am also making a film about how to make this record. And unfortunately again, I can’t mention whom will be working with me on the film. Stay tuned!

I want to thank you for this amazing and honest interview. And I will be going to one of your shows very soon.

Thank you, Mary. I hope to see you at one of my shows.