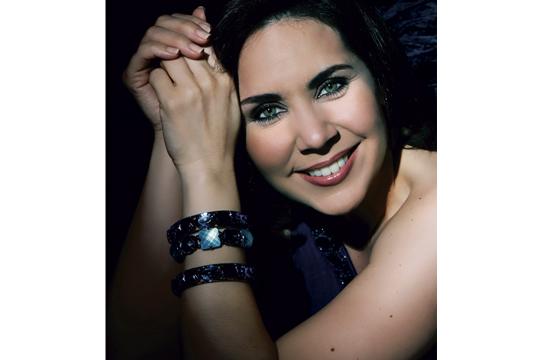 The Los Robles Master Chorale under the direction of Lesley Leighton will provide the choral forces.

“New West Fanfare,” written in honor of the 20th anniversary season by long-time Symphony supporter and board member Craig Zobelein, will open the program.

Soprano Jessica Rivera is established as one of the most creatively inspired vocal artists before the public today.

In her performances on the international concert and opera stages she has collaborated with many of today’s most celebrated composers, including John Adams, Gabriela Lena Frank, Osvaldo Golijov, Jonathan Leshnoff, and Nico Muhly. Rivera has performed with major conductors such as Bernard Haitink, Sir Simon Rattle, Esa-Pekka Salonen, Robert Spano, and Michael Tilson Thomas.

Mezzo-soprano Rebecca Ringle made her Metropolitan Opera main stage debut during the 2012/2013 season as Rosswisse in Richard Wagner’s “Die Walküure.” She returned to the Metropolitan Opera in 2013/2014 season for “The Nose” by Dmitri Shostakovich. She made her New York City Opera debut as Lola in “Cavalleria Rusticana.” Ringle has appeared as a soloist with orchestras throughout the United States and in Europe.

Tenor Matthew Plenk made his Metropolitan Opera debut during the 2007/2008 season. He returns this season as Arturo in “Lucia di Lammermoor” and in its productions of “Die Zauberflote, Don Giovanni,” and “Die Meistersinger von Nurnberg.” Plenk has appeared with major opera companies across the United States and has sung with the Boston Symphony under James Levine, the Philadelphia Orchestra under Charles Dutoit, and the Los Angeles Philharmonic with Gustavo Dudamel, among others.

This season, bass-baritone Andrew Craig Brown made his debuts at Opera San Antonio in The Fantastic Mr. Fox and Salome and at Boston’s Odyssey Opera in The Fantastic Mr. Fox. This spring he makes his debut with the Los Angeles Philharmonic in fully staged performancesbof Unsuk Chin’s Alice in Wonderland at both the Walt Disney Concert Hall and the Barbican in London.

A lively and informative, pre-concert discussion called “Hear & Now Live” about the music on the program begins at 7 pm on Friday and Saturday evenings and 3 pm on Sunday afternoon. The programs are free and open to ticket holders for the respective performances.

By mirrormmg May 8, 2015
in Life and Arts
Related Posts