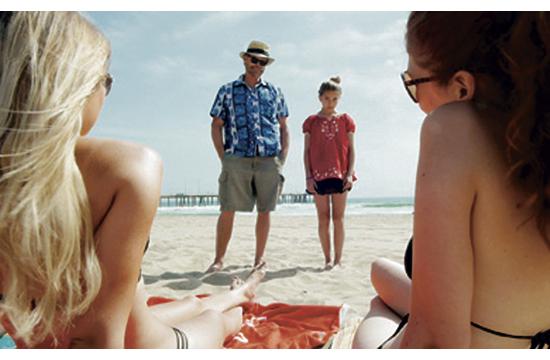 By turns exuberant and headline grabbing violent, the long world-famous local movie star featured in Jim Akin’s new film, “The Ocean of Helena Lee”, is our own Santa Monica oceanfront. Yet watching it in “Helena Lee” is the equivalent of holding a conch shell to your ear and being privy to a singular, captivating experience, even to this writer, who has for decades ridden the bike path and even lived alongside it.

Akin’s vision gets every single resonating shot exactly right, from the majesty of the Pacific Ocean to the atmosphere of a Venice street-party gone sour.

The images in “Helena Lee” are personal and effortless. Akin’s sensitivity to his subjects is apparent. He grew up at the beach and it shows. Our old Santa Monica friends are all there. That skater guy with the oversized patriot hat and sunglasses, the colorful murals, the carnival boardwalk, the streetlamps and colored lights of the Ferris wheel on the pier, the cliffs and bluffs shown here from the inside out.

Akin’s autobiographical second feature film introduces us to the shimmery promise of summer for 12-year-old Helena Lee (played by sun-kissed, natural, Moriah Blonna) in which she will discover “her story.” She contemplates beach life as a map to her own future while observing her disillusioned dad. Helena is the sort of tough, vulnerable kid who shrugs off school with, “I like to learn, I don’t like to be taught.”

Helena Lee’s former surfer father Micky Lee (Tom Dunne) is now a shipwreck derelict of a guy. Micky still speaks like a poet and thinks like a philosopher even as he acts like a sometime friend. He earns enough playing drums and percussion in a strip joint to barely cover rent (as Helena is outgrows her closet bedroom – complete with a family photograph by none other than Dennis Hopper). Micky’s erratic behavior and uncontrollable despair that his best years are behind him prepares us for Helena’s subdued fall and dark winter ahead.

Akin wrote, directed, shot, captured sound and edited this polished gem of a film, “a crew of one on set.”

“Being with a small crew, just me, allowed me to capture what I wanted and when,” he said. “It allowed me to get in very deeply.”

What Akin wanted, he explained, his everyday conversation echoing the eloquence in his film dialogue was “to understand the power of the beach, to use the ocean realm as a character, to mirror the seasons.”

“It opens in summer, followed by melancholy fall and winter, when the most promising and beautiful place in the world can, amidst the howling of winter and the expanse of the ocean, make you feel totally insignificant,” he said.

Akin’s background served him as location scout as well.

“I grew up at the beach and wanted to cover that glowing phase on it,” he said. “And there are so many dramatic locations in this area – proven by the mystical fantasyland provided by Mexican palm lined stairs to the ocean from the Palisades bluffs. The wooden steps that dump you onto the boardwalk on the end are almost allegorical.”

Years of compiled beach scenes came first. Then, adds the approachable Akin, “I shot with Mariah for two months in the springtime, including the winter scenes.”

He laughs, “Literally on a day when the weather was dark and menacing, I would call her and say, ‘let’s go shoot now.’”

Akin’s father inspired the story of the beach as a reminder of youth, of what was once.

“My dad was charismatic, a spectacular crash-and-burn fun character, more of an uncle than a dad,” he said. “He would pull me out of school and ride motorcycles outside – but of course problems came out of sustaining the high.”

In “The Ocean of Helena Lee”, former lifeguard, Tom, plays the same kind of former beach superstar, “a split of someone who doesn’t care about anything but fun, someone who can’t find his way back to the good path. Human frailty is a strange and very real thing.”

Still, however eccentric a character Micky may be, he doesn’t come across as charismatic – there is no concern, no empathy on his part that makes us root for him. When Tom reveals to his daughter that she is the only thing he lives for, and then lets her down, it is with an enormous thud. He is, in his own scoffing words, not only a man with a forlorn outlook but one in his own words, “with a black seed for a heart.”

Dunne plays drums and percussion on the soundtrack. He is nothing less than sensational. Akin teamed up with his internationally acclaimed singer/songwriter wife, Maris McKee, to created and produce the film score. Maria McKee also plays Helena’s ethereal, loving mother regularly visiting from heaven.

“The Ocean of Helena Lee” premieres in Los Angeles today, May 8, and will be available on iTunes and Amazon on May 14 with a special screening at the Aero Theatre. All dates include a music performance featuring Maria McKee and select cast members.

By mirrormmg May 8, 2015
in Life and Arts
Related Posts