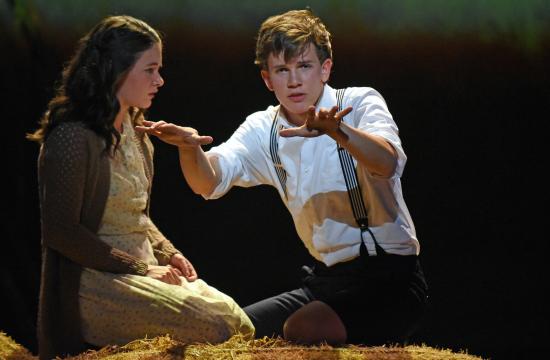 The lobby of the Wallis Annenberg Center for the Performing Arts was filled with excitement as hearing-impaired friends greeted each other with hugs and kisses, signing their enthusiasm that almost translated itself for those of us who are not hearing impaired. This enthusiasm was only the beginning of what was an astounding evening of a rare, emotionally charged theatrical experience.

Before the imaginary curtain went up, the cast milled about a dimly lit stage, stretching and doing a variety of warm-up exercises. In the house, an usher held up a sign with a line through a cell phone signaling the direction to put away all electronic devices. Soon, with the musicians in place high above the stage, this unique production of “Spring Awakening” came to life.

A Tony Award-winning rock musical, with book and lyrics by Steven Sater and music by Duncan Sheik, the play was originally performed on Broadway on Dec. 10, 2006 and closed on Jan. 18, 2009 after racking up 859 performances. The story is based on the 1891 German play by Frank Wedekind, who described his play as “a tragedy of childhood.” It was an indictment of parents, teachers, and the clergy who emotionally paralyzed children by keeping them in the darkness as they discovered their sexuality and the confusion that set in as their bodies became alive with new feelings.

The current production is masterfully directed by Michael Arden, who has elicited deep, compelling, sometimes wrenching performances from each of his actors. He also has made full use of every inch of the Wallis, including the orchestra pit, which symbolized a burial.

The action takes place in a provincial German town in the late 1800s and revolves around a group of adolescent school children who are trying to find answers to their questions precipitated by their emerging hormones. This is an innocent time for these children – an innocence that is challenged by the mystical, magical feelings being awakened in their teenage bodies. They ignore the adults in their lives and try to find answers amongst their peers.

Obviously, what is different about this production is that the cast is comprised of an incredibly talented ensemble of hearing and non-hearing actors who create their characters so thoroughly, that it almost takes your breath away. The principal non-hearing actors have a “twin” hearing actor. As one actor signs, the other actor speaks the lines or sings the ballad. They both have the same emotional content, whether signed or spoken, and act as one integrated person. The actors use the American Sign Language, which, in and of itself, becomes a highly theatrical, balletic component in its beauty, grace, and deep, soulful emotions as expressed by the actors’ bodies.

Wendla, beautifully played by Sandra Mae Frank, speaks and sings through her “twin,” a most talented Katie Boeck, who also plays the guitar. Wendla is an innocent and has no idea how babies are made and sings the lovely ballad “Mama Who Bore Me.” She insists she’s too old to believe in the stork and begs her mother for the truth, which her mother comically avoids by omitting some major details about the male/female baby-making procedure.

The lack of this basic knowledge causes great pain later on with devastating consequences for both Wendla and Melchior, played intensely by Austin McKenzie. Their confusion and mutual “forbidden” attraction is illuminated in a striking duet, “The Word of Your Body,” sung by Melchior and Wendla (Katie Boeck). The tender love scene between them is graphically, but tastefully, acted out. A minister is giving a sermon as we watch these two young people grapple with their initial reluctance to surrender to their desires.

Another outstanding performance was given by Daniel N. Durant as Moritz, with his songs sung by his “twin,” a very talented Alex Boniello, who also played the guitar. Moritz’s failure at school meets with strong parental disapproval resulting in an unexpected outcome.

In a profusion of color, sounds, and dramatic lighting effects, the story is told through a strong narrative and haunting songs. While every number is outstanding, some of them include; “The Bitch of Living” (Moritz and voice of Moritz), “Touch Me” (Company), the rousing “Totally Fucked” (sung by Melchior and Company), “The Mirror-Blue Night (Melchior and the boys),” “IBelieve” (Company), “And Then There Were None” (Moritz and voice of Moritz and the boys), “Whispering” (Wendla, and Katie Boeck), and the closing number “The Song of Purple Summer” (Company). Vocal arrangements are by Annmarie Milazzo, and the band consists of Christian Hebel (violin), Diana Wade (viola), and Tim Loo (cello).

One last observation: Obviously, the hearing-impaired actors cannot hear the applause. So, how the audience showed its standing ovation approval was by raising their arms high into the air and twirling their fingers. You owe it to yourself to see this rare production, as evenings of theatre like this don’t come around that often. You will probably leave the theatre smiling, but with a little lump in your throat.

By mirrormmg June 1, 2015
in Life and Arts
Related Posts