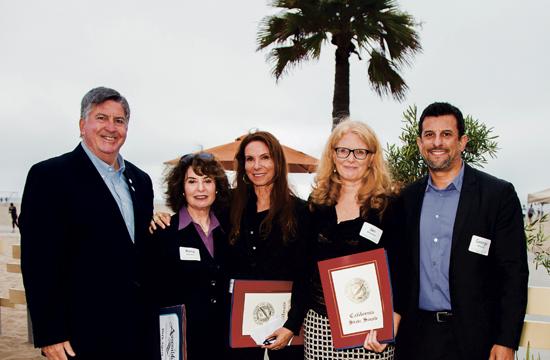 The Santa Monica Arts Foundation presented its third annual awards ceremony at Back on the Beach restaurant on Wednesday, June 17 in recognition of the contributions of local leaders whose efforts support Santa Monica’s artistic, creative, and cultural community.

Herb Alpert and Lani Hall won recognition as Arts Patrons for their extensive support of the arts through the internationally known work of the Herb Alpert Foundation.

Susan Hayden was presented with the Artist in the Community/Bruria Finkel Award for her significant contributions to the energetic discourse within Santa Monica’s arts community.

The Mayor presented the honorees with certificates as well as an original artwork by one of two local artists, both renowned Santa Monica artists: Mitchell Friedman and Bruria Finkel.

Staff from the offices of State Senator Ben Allen and Assemblymember Richard Bloom presented the honorees with additional Certificates of Recognition, further lifting the reach of the awards from the city to state level.

“The purpose of the Santa Monica Arts Foundation is to increase knowledge of, and support for, the significance of the city’s arts and culture community,” said George Minardos, Foundation Chairperson. “The Awards accomplish two things: they acknowledge the ongoing contributions of these exceptional leaders, and encourage others to follow in their footsteps.”

The program was launched in 2013 by the Arts Foundation, a 501c3 organization established to assist in developing support for the arts in Santa Monica. Nominations are collected year round by any Santa Monican who wishes to participate. More information and nomination forms can be found on www.smgov.net/artsleaders.

A committee of Foundation board members and representatives of the local arts community meet annually to review the nominations and make the final selections based on the award guidelines.

By mirrormmg June 26, 2015
in Life and Arts
Related Posts