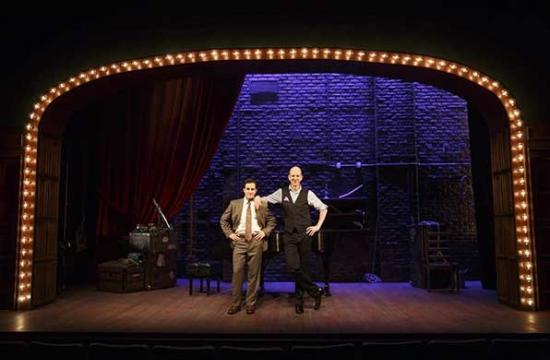 Murder for Two is an Agatha Christie-style whodunit on speed. With an original fun book and entertaining music by Joe Kinosian and book and lyrics by Kellen Blair, under the superb split-second timing and staging by director Scott Schwartz, fasten your seat belts for a non-stop 90 minutes of unabashed, high spirited, comic antics.

Originally performed by Jeff Blumenkrantz as the multiple “The Suspects,” and Brett Ryback as the fumbling wanna-be detective, this award-winning show was named one of the “8 Best Off-Broadway Shows” by NewYork.com.

In this performance, an outrageously funny, gifted actor, understudy John Wascavage took on the daunting task of playing the role of “The Suspects.”  He played 13 different characters, endowing each of them with specific vocal and physical characteristics, bringing each one to life in swift, mercurial transitions.

In this two-hander tour-de-force, both talented actors take turns playing the piano and belting out the catchy score – occasionally trying to upstage each other at the piano in deliberately stylized, comedic movements. You would never think that just hitting one note on the piano could be funny, but indeed it is.

The plot revolves around the murder of Arthur Whitney, a famous novelist who is killed in his home on the night of his birthday celebration. The planned surprise festivities were put together by his unpleasant wife, with the guest list consisting of people who, coincidentally, appeared as characters in some of Whitney’s novels – not all the depictions being complimentary.

One by one the guests “appear” and with his rubber face and elastic body akin to Jim Carey or the famous physical comedian Frank Gorshin, Wascavage shifts into each of the characters in a nanosecond. For example, with only a single prop of granny glasses, Mrs. Whitney springs to life wearing a far out southern accent. In the blink of an eye, he is now a prima ballerina and assumes a selection of exaggerated, elongated ballet poses, including pursed lips.

Meanwhile, the invisible dead body lies downstage center with everyone careful not to step on it. Poor bumbling Marcus grills each of the guests, taking prodigious notes. As he continues his investigation of the guests, they actually seem to “crowd” the stage, thanks to the remarkable Wascavage’s ability.

Some of the other invisible guests included, Whitney’s next-door neighbors, a shrink who knows everything about everyone and is willing to spill the beans, and little nine-year-old Timmy, a member of a 12-boy chorale with only three members. For this character, Wascavage walks on his knees and of course changes his vocal sound. There’s also a firefighter, and the niece of the dead novelist, on whom Marcus develops a crush. The more suspects Marcus interviews, the more he realizes that just about everyone has a motive for wanting the novelist dead, making it difficult to eliminate any of the suspects.

In addition to creating all the characters, imaginary props were also created, including a book represented by Wascavage’s hand. When Marcus says it’s hard to read, Wascavage turns his hand in the other direction, indicating Marcus was holding the invisible book upside down. In one brief scene, Marcus talks to his boss who is depicted in projected silhouette bearing an uncanny resemblance to the famous profile of Alfred Hitchcock.

Laughter abounds throughout the evening with one particularly amusing running gag, which was the sound of a cell phone ringing. Wascavage broke character, as well as the fourth wall, admonishing the audience with:

“You were told to turn those things off.”

This happened several times throughout the evening, much to the delight of the audience some of whom, I’m sure, worried that it might really be their phone.

Lest you are worry that the murderer will get away with, well, murder, just like in Agatha Christie’s many books, there is a satisfactory resolution which is revealed in a most surprising way, but that’s all I’ll say about that.

The technical values of this cabaret-style production are as perfect as the performances. The interior of the mansion set design by Beowulf Boritt is an excellent frame for the non-stop zany antics, with the lighting design by Jason Lyons nicely splashing color on stage reflecting the prevailing action. The proscenium arch is encircled by lights, which light up at appropriate times in the action, with a single bulb lighting up whenever Marcus has an idea. Jill BC DuBoff’s amusing sound design added to this show’s success, as well as Wendy Seyb’s choreography and Andrea Lauer costume design.

This delightfully entertaining show has been performed all over the country.  How lucky we are that it landed on stage at the Geffen Playhouse.

By mirrormmg June 18, 2015
in Life and Arts
Related Posts