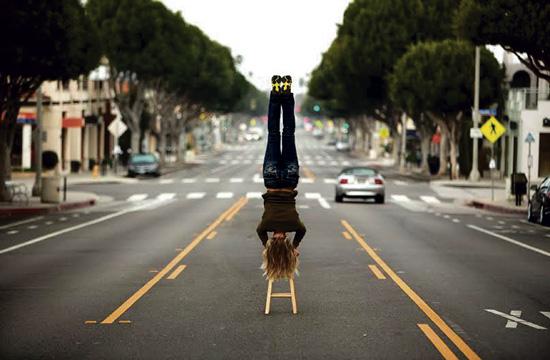 Ye Olde King’s Head is one of few restaurants in Santa Monica where one can get a shepherd’s pie that isn’t a frozen one from Trader Joe’s. But it’s not just a British pub on the corner of Santa Monica Blvd. and Second Street; it’s a place where one can laugh so hard that their pint may shoot through their nose.

Once a month, the venue hosts a free show called West of the 405 that’s run by comedian Lang Parker. She started this show in 2013 after touring overseas in Afghanistan, entertaining troops, when a dire incident occurred.

“There was one night we got shot at,” Parker said. “The alarm went off, and that means you hit the ground wherever you are because there’s incoming bullets. I can’t tell you the feeling you get; you don’t know if you’re going to die. ‘You’re like, this is it?’ I knew I had to do something in my life after that. So I made the vow to put on a show once a month to kind of pay it forward in laughter.”

When not in town auditioning, performing, or working on projects, Parker is hitting the road either solo or with another comic Benjie Wright in a duo affectionately called Hick and Chick. However, all other time is spent working on this show.

Originally held at 8 Espressos in West L.A., she moved to the King’s Head for a couple of reasons.

“I wanted a bigger venue, but still something intimate,” she said.

The show itself takes place in a dining room off to the side of the bar. The room is covered with portraits of old British kings, complete with their names in embossed script, and a short bio beneath them.

Chairs are brought in to fill the center, which is surrounded by booths. The comedian on “stage” stands under where King Henry VIII’s portrait would be, so in effect every comic gets to be king for however long their set is, both literally and figuratively.

One comic made light of this, “You know, King Henry had syphilis and a beer gut. I have one of the two of those things,” he said, jokingly patting his belly before continuing his set.

West of the 405 has also built quite a following in its two-year lifespan. Two ladies and their 12-year-old nephew attended a recent show, which garnered much attention from the comics, who took a couple of minutes out of their sets to rib the boy for coming to a comedy show.

When asked about it after the show, one of the women replied, “We’ve been coming to this show almost every month for two years. We brought along my nephew because he likes comedy.” The woman chose to remain nameless.

It’s truly a feat when your show touches people of every demographic, which Parker seems to have done with West of the 405.

If you are looking for a free comedy show to have with a pint and some fish and chips, and are looking for a show where there are frequent famous drop-ins and good times for all, come down to West of the 405 once a month when you can (next show is Aug. 3.) For more information on the show, visit https://goo.gl/0PTuOc. For more information on Lang Parker, visit langcomedy.com, or follow her on Twitter: @Langcomedy.

By mirrormmg July 21, 2015
in Life and Arts
Related Posts