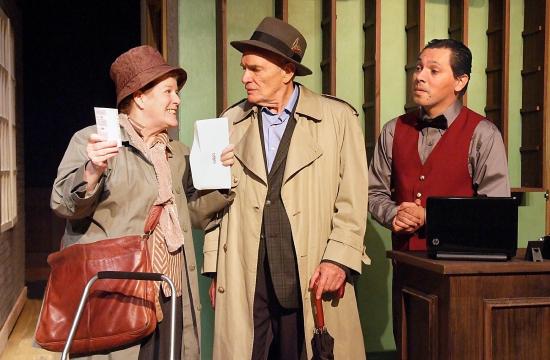 To do a riff on a recent credit card commercial that ends with the spokesperson saying: “What’s in your wallet?” – that tag line could be rewritten to “What’s in your suitcase?”

What’s in the character of Matt Browne’s (Tom Bower) suitcase is not the usual requisite travel items as he’s packed some bizarre things, including a blow-up doll named Jenna purchased from Larry Flint’s store, mouthwash, condoms, and a framed photo of his deceased wife Betty to whom he was married for 38 years. To complete the contents of his suitcase are the two “Vs,” Viagra and Valium.

Still grieving over the loss of his wife, under the advice of his therapist, Dr. Yablonsky, well played by Thaddeus Shafer, a shrink with his own marital problems, Browne decides to take a trip to London to try to pull himself out of his depressed state. He chooses a small boutique hotel called Off The King’s Road, yes, the same title as the play, which is a guest production at the Odyssey Theatre.

The suffering shrink advises him to put a blackboard in his hotel room and make a list of possible cultural things to do – art, music, stage, museums, etc. Not on the list was visiting a Serbian hooker from Zagreb by the name of Sheena, played by Maria Zyrianova. Her business plan is pay now, play later. Sheena, who might be a hooker with a heart, has an unseen violent boyfriend who is not overly happy with her line of work. During Browne’s first visit to her cramped den of inequity, the only sexual favor he wants is to lay his head on her lap. During another visit, he tries to engage her in a conversation about Ingmar Bergman’s ‘Wild Strawberries’, and, of course, she has no idea what he’s talking about other than she loves Rambo.

Completing the cast of characters is Freddie, the obsequious manager of the hotel played to the max by Michael Uribes, and Ellen Mellman, a slightly daffy, dowdy, English woman totally devoted to her (unseen) Himalayan cat. Casey Kramer’s Mellman gets below the surface of her character revealing some interesting layers.

With regard to the direction, I have great respect for Amy Madigan’s work as an award-winning actress and really wanted to like her directorial work in this play. However, her direction is fraught with problems, beginning with a poor, fractured script and the awkward staging of what can easily be referred to, as a series of short, not necessarily connected, scenes. There were interminable, overly long blackouts so that if there was any possibility of a through-line to the action, that was continuously stomped on. The stage “business”* was excessive and sometimes the action stopped while the business was executed, versus execution in conjunction with the dialogue.

Given that this is not a well-written play, the truth is if the lead role of Matt Browne was played by let’s say Madigan’s brilliant actor husband, Ed Harris, the experience might actually have been enjoyable. But Browne’s performance didn’t get much past line readings, dropping his voice at the end of each sentence. Despite his long list of theatrical credits, he did not have the stage presence to carry the lead in what is a problematic piece of material. Adding to the failure of this production was the cramped set design by Joel Daavid of both the hotel room and Sheena’s apartment, and a clawing, disparate sound design by Joseph “Sloe” Slawinski. I have seen their creative work before and it’s usually top-notch, but this time the results were not up to their usual level of excellence.

There’s that old show biz axiom that says, “If it ain’t on the page, it ain’t on the stage,” and Off The King’s Road could be the poster child for that theatrical truism.

*Stage business refers to the gestures and activities an actor executes as part of a scene.

By mirrormmg July 11, 2015
in Life and Arts
Related Posts