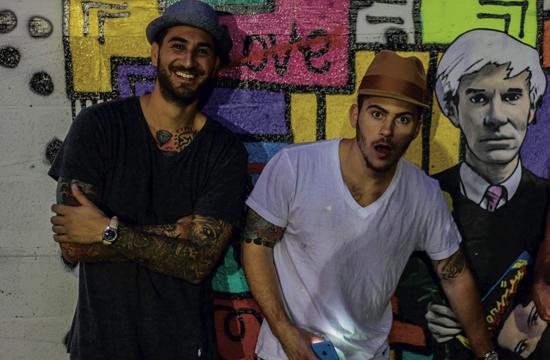 “We were driving down Main Street and saw this show going on,” said New York City street artist known as Westgard. “The gallery is very inviting, with a huge glass store front. Inside were bright, large-scale paintings and lots of people. So we parked and went in.”

Westgard is referring to the first art opening that ever took place at Essentia on Main Street in Santa Monica. An organic mattress store, the Canadian-based company, Essentia, opened its first U.S. store in Santa Monica over five years ago and now offers art exhibitions curated by Lou D’Elia, a local Santa Monica-based artist and curator.

Artist Gino Perez’s work was on view in the showroom when two New York City artists, Westgard and FLOrE (who were visiting LA), drove by.

“Lou approached us and told us he was the curator,” Westgard said. “The next day we had a meeting at his home.”

Westgard and fellow artist and collaborator FLOrE are now scheduled to share an exhibition on Saturday, July 11. The two artists will showcase 20 works of art in an exhibition entitled “CALIFORNIA Dreaming.”

Although the two have often worked together on many projects, the exhibit will not offer any collaborations. Instead it will feature 10 solo artworks from each artist.

Westgard and FLOrE are well known in the New York City street art community, but both admitted they were excited to show their works in Los Angeles.

“I am most excited to see the feedback of the people,” said Westgard. “I believe it will be a much different audience than usual….a bit more mature and not used to our style.”

FLOrE is also looking forward to the July 11 opening.

“The gallery is beautiful! I love that you can see art from the street,” said FLOrE. “The lighting is great!”

FLOrE has shown his art previously in Los Angeles and has been creating art since he was about seven.

He said he knew he would be a painter ever since he was a child.

Inspired by artists such as Picasso, Keith Haring, Roy Lichtenstein, KAWS, and Andy Warhol, FLOrE chooses to spotlight the true essence of reality through his art.

“CALIFORNIA Dreaming” opens on Saturday, July 11, with an artist reception from 6-10 pm at Essentia located at 2430 Main Street in Santa Monica. Beer, wine and appetizers will be served. For more information, call 310.450.7819. The exhibition will remain on view through Sept. 6. View the website at www.myessentia.com.

For more information about the artists, see loveforthepeople.co or Thatartistflore.com.

By mirrormmg July 3, 2015
in Life and Arts
Related Posts