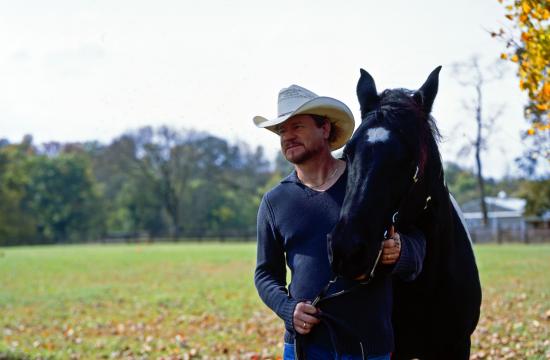 Two-time Grammy Award winner Paul Overstreet has chosen Santa Monica and the Ruskin Group Theatre as the location to premiere his new musical, “Sneaky Ole Time.” A BMI Songwriter of the Year (five years in a row), and Nashville Songwriters Association International Hall of Famer, Overstreet didn’t have much trouble catching Ruskin’s attention, but locking in a deal was a journey that took another few years.

It started with a plane ride and, so far, there is no ending in sight. After opening on Saturday, Aug. 1, the plan is to have an eight-week run, and then to reconnoiter for a discussion on the possibilities for moving the production onward, perhaps Nashville or New York.

The story features day drinking strangers in a Tennessee honky-tonk, as they discover that they have much more in common than they ever could have imagined.

“This is sort of a cosmic and comic exploration of love and marriage. No matter what brings them all together to hash it out on a Wednesday afternoon, nobody leaves unchanged,” said Overstreet. “The characters are designed, with book by Steve Mazur, for giving voice to disparate perspectives, something many of us have struggled with.” It’s built around 22 of Overstreet’s greatest songs, including When You Say Nothing at All, which was featured in the Julia Roberts/Hugh Grant film Notting Hill, (You Are the Reason We’re) Not Going to Make It, and Forever and Ever, Amen, originally made popular by Randy Travis.

Overstreet has charted 16 singles on Billboard as a recording artist including two number one hits. Noted vocalists Tanya Tucker, Kenny Chesney, Alison Krauss, The Judds, and Randy Travis have all covered his songs.

Now he adds “musical theater” writer to his list of talents, and he talks about his perspective of travelling down that new road.

How did this all come about, and why did you chose Santa Monica for the world premiere of this production?

Overstreet: It began with a chance meeting on an airplane with producer Yonta Taiwo. I had worked on a couple musicals before and spent some time with my friend Shel Silverstein, who would talk about working on plays. I always thought it was the coolest thing. I believed drama would give songs more impact, which in another way is what videos do for songs. Theater is even more powerful.

During my conversation with Yonta, she mentioned that she might be able to connect me with people in the theatre world through the Ambassador Theatre Group in London. They sort of mentored us, moving us forward and recommending us to the Ruskin Theatre Group. So after lots of research over a few years, we wound up getting a meeting in Santa Monica with Michael Myers and John Ruskin. From that point we knew that this was the place and these were the people we wanted to work with on the project. They introduced us to Steve Mazur who eventually wrote the book. The Ruskin Group Theatre, at the Santa Monica airport, has really made this project fun and been able to move it along smoothly with an extraordinarily talented team, including Myers as the Director and Cliff Wagner as Musical Director.

Did you find it difficult to put the story to the music, instead of the other way around?

It’s probably more challenging to do it this way but because the songs were already written and had a life of their own, it was the inspiration for the approach. In a way it really helps the creative process because it does give you a guideline to field the inspiration. Steve Mazur has weaved the story through the songs and put the book together masterfully.

Has the director and the cast had an impact on the development of the show or was everything set in stone before you cast it? If it did change during rehearsals, is that a process that you enjoy working through?

I’m learning, it’s an evolution. It started with the music, then book, now the book is stand alone strong. From there we worked out which songs fit and then we worked out what must be cut. Michael Myers has been doing the heavy lifting as the Director and it’s never been set in stone. It’s shaping up to be a little more special each rehearsal. And yes, I do love this process, immensely.

What were some of the biggest challenges?

Just getting past the insecurities and accepting that we have been making the right choices along the way, I guess that’s been the biggest challenge. Otherwise, we have a wonderful team and having the skill level at the Ruskin has added to the comfort of moving forward, tremendously.

Can you talk a little bit about the band, how you chose them, and if there are new arrangements for your songs?

Cliff Wagner, our Musical Director, has been working with the singers since day one, and has them performing the songs in a way that seamlessly enhances the show. He’s very good at that. He’s selected some really great players in addition to himself, for the on stage live band that will be a part of the show. He’s worked with the Ruskin before, written a musical of his own, and has definitely made my job easier.

What do you hope the audiences will gain from their experience of seeing this show?

I think the audience will come away thinking about the questions that are presented in this piece, besides just feeling like they had a great time. The questions are about relationships and the choices we make in life. Maybe, just maybe, in some small way they’ll be inspired to make better choices for themselves.

Are you still keeping busy with concert dates and recording? What’s next for you?

Yes, I still travel and play shows. I don’t really like the 300 days a year touring schedule, like some artists do, but I still like getting out on the road. It’s more acoustic these days, for me. I enjoy that. But I also love hanging in the studio and writing for other artist. I get the biggest kick out of having a song recorded by other artists. Always a thrill, it and never gets old to me.

“Sneaky Ole Time” opens Aug. 1 and runs Fridays and Saturdays at 8 pm, Sundays at 2 pm through Sept. 19, 2015. Ruskin Group Theatre is located at 3000 Airport Avenue, Santa Monica. Tickets are $30 ($25 for students, seniors, and guild members) and can be purchased in advance by calling 310.397.3244 or online at www.ruskingrouptheatre.com Ample free parking available.

By mirrormmg July 27, 2015
in Life and Arts
Related Posts